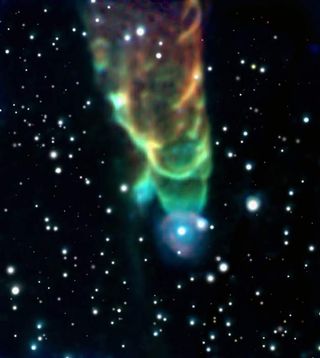 The Herbig-Haro object 49/50 looks like a tornado in space.
(Image: © NASA/Spitzer/CfA)

WASHINGTON,D.C.--High-energy particles spewing out of a young star in a nearby stellarnursery are plowing through interstellar clouds and creating a giant spiralstructure in space that looks like a glowing, rainbow-colored tornado,scientists said today.

Thestar spewing the particle jet lies 480 light-years away in a star-formingregion known as Chamaeleon I.

Ina photographtaken with NASA's Spitzer Space Telescope, that star is actually not visiblebecause it is located off the upper edge of the image.

Theluminous tornado-shaped structure is known as a Herbig-Haro object andestimated to be about 0.3 light years, or nearly 2 trillion miles, longand shows up in the infrared.

Herbig-Haroobjects are formed when highly energized particles--usually electrons andprotons--are ejected from a young star and collide with nearby clouds ofinterstellar dust and gas. The jet particles stream out of the stars at speedsof more than 100 miles per second and heat the surrounding clouds to aninfrared glow that can be detected.

Astronomershave known about Herbig-Haro objects for decades but have never observed onewith this unique spiral structure; this particular particle jet is known asHerbig-Haro 49/50, or HH 49/50.

"I'venever seen anything quite like this one," said Giovanni Fazio, a physicist atthe Harvard-Smithsonian Center for Astrophysics (CfA) who was not involved inmaking the discovery.

"Wewere really quite stunned by it," he told SPACE.com.

Asparticle jets move through the clouds, they create triangular shockwaves,similar to the wake left behind a speeding boat.

Thereason the tornado appears multi-colored is because particles at the tip of thejet are more excited than those nearer to the star where they are emanatingfrom. The excited particles radiate short-wavelength emissions, which in thiscolor-coded image appear blue; emissions from particles near the wide base ofthe jet are longer and appear red.

Scientistsaren't sure what is behind HH 49/50's unique spiral shape. One hypothesis isthat magnetic fields in the region are somehow twisting the particle jets;another idea is that the shockwaves are creating eddies in the dust cloudswhich then glow and become visible.

Scientistsalso don't know whether the star at the center of the image is associated withHH 49/50 or not.

Ifit is, then it could mean that the image actually shows HH objects from twostars colliding with each another. The more likely option, scientists say, isthat the center star is actually located much further away and only looks likeit's associated with HH 49/50 because it happened to be in Spitzer's line ofsight when the image was taken.

The teamthat made the discovery was headed by John Bally of Colorado State University.It announced today at the 207th meeting of the American AstronomicalSociety.