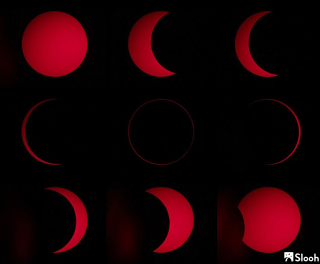 This image shows the stages of the 2017 annular eclipse surrounding peak annularity, courtesy of the Slooh Community Observatory.
(Image: © Slooh)

A "ring of fire" appeared in the sky over parts of South America, the Atlantic Ocean and Africa today (Feb. 26), during an annular solar eclipse.

An annular solar eclipse occurs when the moon passes directly in front of the face of the sun, but does not appear large enough in the sky to entirely cover the star. The black disc of the moon blocks out most of the sun's face, but a sliver of the sun remains visible. You can see a video of this incredible sight here, courtesy of the Slooh Community Observatory.

Slooh hosted a live webcast of the annular eclipse, and shared views of the event from Chile, Argentina, and Uruguay. At the observatory in Chile, the eclipse peaked at about 8:35 a.m. EST (1335 GMT), creating a halo of light in the sky. [Where to See the 2017 Total Solar Eclipse, State by State]

"That is mind boggling!" said Gerard Monteux, host of the Slooh webcast, as he watched the dark sphere of the moon passing over the bright disc of the sun, eventually creating a red "ring of fire." When the eclipse reached its peak, Monteux became quiet for a few seconds. "I'm sorry, I'm just…I'm speechless," he said.

"It's hard to believe that's our sun that we see every day," said Burnie Burns, founder of Rooster Teeth Productions and a guest on the webcast. "It's so interesting to see something from a totally new perspective. Look at that!"

The moon's orbit around the Earth is not a perfect circle, but an ellipse (which is more like an oval). That means the moon isn't always the same distance away from the Earth. When the moon is close to the Earth, it appears larger in the sky, so that during an eclipse the moon can appear to block the entire disc of the sun. During an annular eclipse, the moon is farther away from the Earth, and appears smaller in the sky, so it does not entirely cover the disc of the sun.

During the Slooh webcast, Eric Edelman, a Slooh astronomer, said that modern science provides humans with the opportunity to not only understand eclipses, but predict when and where they will occur.

"At this point we can predict eclipses out hundreds of years because we know the orbits of [the Earth, sun and moon], and we know that to an extreme precision," Edelman said. The alignment of those three bodies "shows to us that our universe is constantly in motion, and [during an eclipse] we get to see a really incredible piece of that action," he said.

On Aug. 21, 2017, a total solar eclipse will be visible in the U.S. You can learn more about where and how to see the total eclipse here at Space.com.