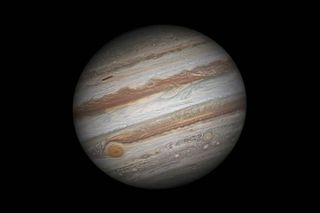 Jupiter in a frame from the "Journey to Jupiter" video project led by Peter Rosén in Stockholm. Rosén's team combined more than 1,000 high-resolution photos of Jupiter taken over the course of 102 days to create a time-lapse video.
(Image: © Peter Rosén/PixMix)

To create a stunning video of the largest planet in the solar system, 91 amateur planetary photographers from around the world pointed their telescopes at Jupiter from December 2014 to March 2015. You can see the "Journey to Jupiter" video on YouTube here.

The team captured more than 1,000 photos of Jupiter over a period of 102 days. Stitched together, these images form a remarkable time-lapse view of the planet's lively atmosphere. The resulting high-resolution video shows 250 revolutions of Jupiter sped up one million times. [Jupiter Shines in Images by Citizen Scientists (Gallery)]

In the video, titled "Journey to Jupiter," you can watch Jupiter's Big Red Spot spin while the "string of pearls" — a sequence of eight little white storms — rotates at 40 degrees south latitude on the planet. But the most striking features in the video are Jupiter's dynamic cloud belts around the equator.

"For us amateur astronomers, and even for the pros for that matter, Jupiter is one of the most dynamic and thrilling object[s] we can observe in the night sky with rather fast variations in its visible surface structures," Peter Rosén, an astronomer in Stockholm, who led the project, told Space.com in an email.

After collecting all of the images from the group, contributors Christoffer Svenske and Johan Warell combined them into cylindrical projections, or the rectangular, map-like views shown in the video. Rosén then "color corrected, stacked and seamlessly stitched them into a total of 54 complete maps" of the planet's surface.

"It shows the technical skills of the worldwide community of amateur planetary photographers to be able to reach this high level of detail," Rosén said.

This is not Rosén's first time observing Jupiter's cloud belts. Before this project, he created another animation, called "Voyager 3," of Jupiter's cloud belts using images that he and six other amateur astronomers in Sweden created from their own backyard observations.