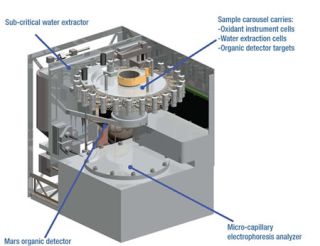 The Urey:Mars Organic Oxidant Detector has been designed by NASA-funded researchers tolook for life on Mars.

The device is named afterHarold Urey, who received the 1934 Nobel Prize in chemistry; Dr. Urey is alsoknown for a 1953 experimentwith Stanley Miller in which it was shown that a lightning-like discharge in atest tube full of methane, hydrogen, ammonia and water could produce aminoacids.

Every form of life on Earthhas proteins assembled from chains of amino acids. However, amino acids can bemade both by living organisms and by non-biological processes. The presence ofamino acids alone do not prove the existence of life.

A Urey component called themicro-capillary electrophoresis unit has the critical job of separatingdifferent types of organic compounds from one another for identification, includingseparation of mirror-image amino acids from each other. "We haveessentially put a laboratory onto a single wafer," said Dr. RichardMathies of the University of California, Berkeley, a Urey co-investigator.

The European Space Agencyhas chosen Urey to be part of the payload for the ExoMarsrover planned for launch in 2013 [image]. The rover will grind Martian soil to a finepowder and then deliver it to a suite of instruments, including Urey.

The Urey sensor will remindmany people of the long range "sensor scans" on science fictionprograms like Star Trek. However, author FrankHerbert thought about the idea a decade earlier in his short story CeaseFire:

Theantennae of the Life Detector atop the OP swept back and forth in a rhythmichalfcircle like so many frozen sticks brittle with rime ice...
(Read more about the Frank Herbert's fictional life detector)

You might also beinterested in this earlier article on life detecting sensors: ZoeRobot To Find Life On Distant Worlds. See also these related stories:

Read more about Urey at NASA.