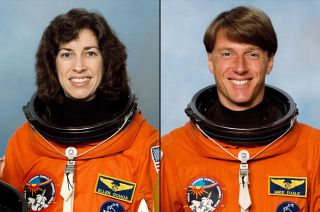 Ellen Ochoa and Michael Foale, seen here as STS-56 crewmates in 1993, will be inducted into the U.S. Astronaut Hall of Fame.
(Image: © NASA via collectSPACE.com)

The first Hispanic woman to fly into space and an astrophysicist who turned to the stars to help him survive a dangerous collision in orbit will be inducted into the U.S. Astronaut Hall of Fame in May.

Former NASA astronauts and crewmates Ellen Ochoa and Michael Foale will be enshrined as the Hall's 2017 class of inductees at the Kennedy Space Center Visitor Complex in Florida. A public ceremony on May 19, followed by a gala dinner hosted by the Astronaut Scholarship Foundation the next evening, will welcome Ochoa and Foale as the 94th and 95th honorees in the Astronaut Hall of Fame.

"NASA's mission is always expanding with a goal to learn more and go further. Our two new Hall of Fame inductees have been pivotal in keeping that mission on course," said Dan Brandenstein, chairman of the Astronaut Scholarship Foundation and a former space shuttle astronaut who was inducted in the Hall in 2003. "The courage, dedication and passionate spirit exhibited by both Dr.'s Foale and Ochoa is indicative of the extraordinary individuals who have been recognized in this way." [Photos: The Kennedy Space Center, NASA's Historic Spaceport]

Ochoa, who was the 18th American woman to launch in space, and 22nd out of the 60 to date worldwide, is the ninth female astronaut to be inducted to the Hall of Fame since it opened in 1990. She logged more than 40 days in space studying solar activity and helping to build the International Space Station.

Foale, who holds dual citizenship in the U.S. and UK, was the first Brit to spacewalk and at one time held the record for the most time in space by an American. He spent more than a year off Earth — almost 374 days — on board five shuttle missions and one Russian Soyuz flight, conducting solar observations, servicing the Hubble Space Telescope, and living on both the Russian Mir and International Space Station.

Foale and Ochoa were crewmates on STS-56, the space shuttle Discovery's 16th mission, in April 1993. The launch marked Foale's second trip into Earth orbit since becoming a NASA astronaut in 1987, and Ochoa's first, having joined the corps three years later in 1990.

Serving as mission specialists on the five-member STS-56 crew, Foale and Ochoa helped to operate the Atmospheric Laboratory for Applications and Science-2 (ATLAS-2) that was developed to collect data on the relationship between the sun's energy output and Earth's atmosphere and how those factors affected the planet's ozone layer. During the nine-day flight, Ochoa used the robotic arm to deploy and retrieve a satellite that observed the solar corona.

Foale's first mission, STS-45 in March 1992, was devoted to the first ATLAS. He followed that and STS-56 by joining the crew of the first shuttle mission to rendezvous with the Russian space station Mir. It was during that mission, STS-63 in February 1995 that Foale performed the first of his four career spacewalks.

Foale's fourth spaceflight returned him to Mir, this time to dock and stay for 144 days on board the orbiting complex. Launching with the STS-84 crew, Foale became the fifth American to live on board Mir in May 1997. Six weeks into the mission though, a Russian cargo ship collided with Mir as a result of a failed manual docking system test, causing the space station to begin depressurizing.

"'This is a real emergency,'" Foale recalled thinking at the time, according to a NASA oral history. "'You'd better focus on getting this sealed off here.'"

Foale and his two Russian crewmates set to work closing the hatch to the damaged Spektr module, which stabilized the station's air pressure. The impact however, threw Mir into a spin, at a rate of about once every six minutes.

"[I] put my thumb against the window, looked at the stars, and was able to tell the ground what the spin rate was," he recounted. Foale's background as a physicist gave him the basis by which to advise his fellow cosmonauts how to fire thrusters to bring the space station under control, though it ultimately took two days to recover.

Foale flew in space twice more, first in December 1999 on STS-103, the third shuttle mission to upgrade the Hubble Space Telescope, and then on Soyuz TMA-3 for a 195 day stay on board the International Space Station during which he commanded the orbiting laboratory's Expedition 8 crew.

Ochoa followed her first launch into space by flying on the third ATLAS mission, STS-66 in November 1994, on space shuttle Atlantis. As during her maiden flight, Ochoa led the deployment and retrieval of a free-flying science platform, this time a satellite that measured the variability of Earth's atmosphere.

Ochoa next lifted off with Discovery's STS-96 crew on the first shuttle flight to dock at the International Space Station in May 1999. During approach, Ochoa tracked the orbiter's trajectory using the vehicle's own radar system and a laser ranging device mounted in the payload bay. After docking, she helped transfer 4 tons of supplies for the arrival of the space station's first resident crew and operated the space shuttle's robotic arm during an 8-hour spacewalk by two of her crewmates.

"I feel very fortunate to play what is essentially a small role in the overall assembly and operation of the International Space Station," Ochoa said prior to her second visit to the complex in April 2002. "It is just an incredible international venture."

Ochoa's fourth and last spaceflight, STS-110 in April 2002, installed a segment of the space staton's backbone truss, which required the first use of its seven-joint robotic arm to maneuver spacewalkers.

Ochoa, who today is director of the Johnson Space Center in Houston, left the astronaut corps in 2003. Foale stayed until 2013, retiring as the chief of the branch that supports Soyuz and station operations, as well as the development of new spacesuits.

Ochoa and Foale were selected for induction by a panel of astronauts, mission controllers and journalists overseen by the Astronaut Scholarship Foundation. To be eligible, they needed to have made their first flight into space at least 18 years ago, be U.S. citizens trained by NASA, and now be retired from the astronaut corps.

The U.S. Astronaut Hall of Fame was founded in 1990 on the suggestion of the original Mercury astronauts. It is now a featured part of Heroes & Legends, a public attraction at the Kennedy Space Center Visitor Complex.