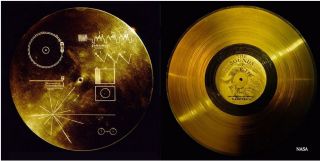 A Kickstarter to recreate and remaster the Voyager Golden Record has been so successful that the founders plan other projects that will combine the interests of art, science and consciousness.

The original record was an initiative to put a capsule of Earth's culture and history on to the twin NASA Voyager spacecraft, which launched from Earth in 1977 for a prime mission to fly by Jupiter, Saturn and out of the solar system. Voyager 2's mission was extended to image Uranus and Neptune as well, making it the only spacecraft to visit those planets.

The spacecraft are still flying and communicating with Earth, with Voyager 1 passing into interstellar space in 2012. In 40,000 years, it is expected that both will pass by neighboring star systems; the record is on the spacecraft just in case a curious (and very lucky) extraterrestrial wants to learn more about where they came from.

David Pescovitz, managing editor of Boing Boing and who has followed the twin Voyager spacecraft since their launch — when he was seven years old — said recreating the famed record on the spacecraft was an "inspiring learning experience." He and Timothy Ferris, the original producer of the record, created a company called Ozma Records to continue work of this kind even after this Golden Record project is finished. More announcements will be made in the coming months.

"We've continued to have amazing experiences and breakthroughs, which were possible because of support we received from the Kickstarter," Pescovitz told Seeker. The project raised $1.36 million, far exceeding its original $198,000 goal and allowing more copies of the record to be shipped to supporters.

Making the record again has sparked a journey across time and space, even for the people involved in Pescovitz's project. Archivists at Sony Music were able to locate the original master tapes used to make the golden records back in 1977, tapes that have sat unplayed in underground bunkers since they were created. This will be the source of the audio released for the Kickstarter records.

A recent visit to NASA's Jet Propulsion Laboratory in Pasadena, Calif., yielded archival pictures of the Voyager Golden Record being made, many of which were never released before. These will be included in an accompanying book with the Kickstarter project.

"We're grateful... and we think about how fortunate we are every day to have this opportunity," Pescovitz said. The records should be shipped to backers before the 40th anniversary of the Voyager 2 launch in August.

Suzy Dodd, project manager of the Voyager mission since 2010, says the Golden Record has kept the mission in the public eye. Inquiries still come into her at least every few months about the record, and how perhaps NASA would recreate a time capsule if they were to redo it today.

"The goal was to show off all of the Earth — not just a western culture, but a far eastern culture, African and others," Dodd said. "I would hope that people would still want to do that with slightly more modern pictures and more modern music. Maybe more about technology. It probably wouldn't be a record any more. Maybe a CD."

Dodd added that she would expect the United States might put more of a political stamp on it now as well, simply because NASA is a government-funded agency and the U.S. might want to highlight that more. "I think there's more sensitivity to wanting to do something first as a country."

Dodd started her career on the Voyager project in 1984 after college, working in the sequencing and command areas. She remained through the Uranus and Neptune encounters of Voyager 2 and left the project in 1990 to join Cassini, a Saturn mission that she says is the "child" of Voyager. (That's because both Voyager spacecraft got to Saturn in the 1980s, raising questions that Cassini was designed to answer a generation later.)

She added that to this day, there are people who have been on the project since its inception. Last year, two people retired who were original members of Voyager. One of them was 80 years old. "His wife wouldn't let him work past 80," she said with a laugh.

WATCH VIDEO: Voyager 1: Where To Next?