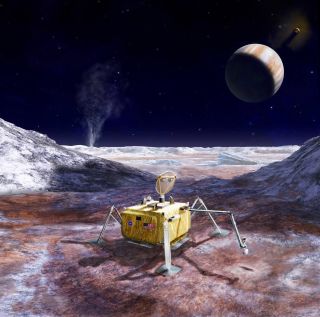 A potential NASA life-hunting mission to the surface of Jupiter's ocean-harboring moon Europa is really starting to take shape.

The stationary Europa lander would use three different instrument suites to search for signs of alien life in samples collected from just beneath the moon's icy surface, according to a new report by the 21-member "Science Definition Team" (SDT) for the possible mission.

These primary instruments would include an "organic compositional analyzer," a microscope system and a "vibrational spectrometer," stated the report, which was submitted to NASA on Tuesday (Feb. 7). [Europa May Harbor Simple Life-Forms (Video)]

"The science return possible from the model payload is such that, if life is present in Europa's ice at a level comparable to one of the most extreme and desolate of environments on Earth (Lake Vostok ice), then this mission could detect life in Europa's icy surface," the report's authors wrote. (Lake Vostok lies beneath the surface of the East Antarctic Ice Sheet.)

Hunting for alien life would be the mission's primary goal. But it would also seek to assess the habitability of the huge ocean of liquid water that sloshes beneath Europa's icy shell, and to characterize the moon's surface and near-surface environments to help enable future robotic missions.

Astrobiologists regard the 1,900-mile-wide (3,100 kilometers) Europa as one of the solar system's best bets to host alien life. Not only does the satellite host an ocean, but that ocean is thought to be in contact with Europa's rocky mantle, making possible all sorts of interesting chemical reactions. (Saturn's moon Enceladus appears to be the only other "ocean world" beyond Earth where this is the case, astronomers have said.)

NASA is already developing a flyby mission to Europa, which is scheduled to launch in the 2020s. This solar-powered spacecraft will orbit Jupiter and assess the moon's habitability during the course of 45 close encounters with Europa.

In late 2015, Congress ordered NASA to add a surface component to the Europa mission. The agency is currently studying the best ways to make this happen; the new SDT report is part of that process.

The current vision for the lander calls for it to be launched separately from the Europa flyby probe, according to the SDT report. The lander and a "carrier relay orbiter" (CRO) would lift off atop NASA's in-development Space Launch System (SLS) megarocket as early as 2024.

The mission would reach Jupiter about five years later, then perform a series of Jovian moon flybys over the next 1.5 years to prepare for arrival at Europa, the SDT report's authors wrote.

Once the mission got there, the CRO would stay in Europa orbit. The lander would touch down on the Jovian moon using retrorockets and a "sky crane" like the one that lowered NASA's Curiosity rover onto the Martian surface in August 2012. (Parachutes are not part of the plan, since Europa has no appreciable atmosphere.)

The lander would operate for at least 20 days, until its batteries died. The craft would collect samples from at least 4 inches (10 centimeters) beneath the Europan surface, to get material that hadn't been destroyed or transformed by the harsh radiation bombarding the moon. It would then relay the data back to Earth via the CRO.

The Europan radiation environment would likely limit the CRO's lifetime to about 30 days, according to the SDT team's report, "thus making a longer-lived lander mission difficult to justify."

The lander would be quite busy during its brief operational life, as its proposed instrument payload indicates.

"Along with the analytical suite for detailed analyses of samples, the Europa Lander model payload also includes a pair of color stereo imagers for examining the landing site in 3D (including capabilities for characterizing surface composition), and a seismic package for determining Europa's ice shell and ocean thickness through acoustic monitoring of cracking events in the ice shell," the SDT report states.

The SDT report is far from the last word on the Europa lander mission, which remains just a concept at the moment. For example, NASA will host town hall meetings at two upcoming scientific conferences — one in March and one in April — to get feedback from researchers about the SDT team's findings and recommendations.

You can read the full 264-page SDT report here: http://solarsystem.nasa.gov/docs/Europa_Lander_SDT_Report_2016.pdf