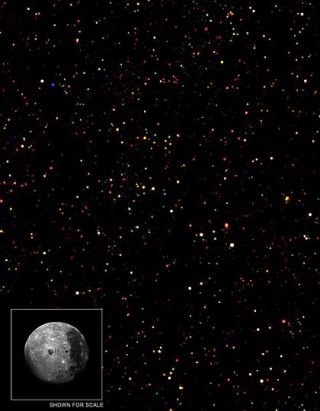 A new wide-field panorama reveals more than a thousand supermassive black holes in the centers of galaxies, some up to several billion times more massive than the sun. This survey was taken in a region of the Bootes constellation. At 9.3 square degrees, it is over 40 times larger than the full moon seen on the night sky, which is also shown in this graphic for scale.
(Image: © X-ray: NASA/CXC/CfA/R.Hickox et al.; Moon: NASA/JPL)

A new survey revealing more than a thousand supermassive black holes in one region of the sky calls into question a popular model of how the gravity monsters behave.

Black holes can't be seen, but astronomers identify them by their gravitational effects on surrounding material and by noting emissions of X-rays and other radiation from their maws.

Typically, a black hole is surrounded by a doughnut-shaped region, or torus, of gas. The view of the black hole's immediate surroundings is blocked by this torus by different amounts, depending on the orientation whether we're looking through it edge-on or looking down on the setup from above, the thinking goes.

If true, then astronomers should find a range of absorption of the radiation from the nuclei of black holes-from nuclei that are heavily obscured and barely detectable to those that are not obscured at all, along with everything in between.

"Instead of finding a whole range, we found nearly all of the black holes are either naked or covered by a dense veil of gas," said Ryan Hickox of the Harvard-Smithsonian Center for Astrophysics. "Very few are in between, which makes us question how well we know the environment around these black holes."

The objects found are called active galactic nuclei, or AGNs. They are very bright objects shrouded in dust and gas and thought to be developing galaxies anchored by black holes.

This study found more than 600 obscured and 700 unobscured AGNs, located between about 6 billion to 11 billion light years from Earth. A light-year is the distance light travels in a year, about 6 trillion miles (10 trillion kilometers). So these objects are seen as they existed billions of years ago. The universe is about 13.7 billion years old.