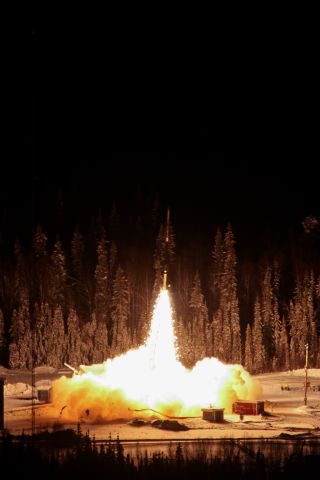 A sounding rocket flew successfully into the Alaskan sky Jan. 27 to track down nitric oxide, a byproduct of auroras (northern lights) that form in the region.

The mission's goal was to see how much nitric oxide there is in the atmosphere, and how high it goes. Nitric oxide is generated during an aurora but is not "significantly destroyed" during the polar night, and under certain conditions it could make its way into the stratosphere and destroy ozone, NASA officials said in a statement. The ozone changes could in turn change stratospheric temperature and affect wind circulation on the Earth's surface.

"The rocket team did a great job of pointing us at the star and our spectrograph saw it clearly throughout the flight," Scott Bailey, the principal investigator for PolarNOx from Virginia Tech, said in the statement. "We got plenty of data to work through."

Auroras are created when charged particles streaming from the sun (also known as the solar wind) energize gases in the magnetosphere, which is a region of the upper atmosphere. When the gases release this added energy, they also emit light particles (photons) in specific wavelengths, which are visible as different colors in auroras.

PolarNOx is the first of three missions that will launch from the range between January and March. The others, which will include two sounding rockets each, will further probe the nature of auroras, including "the interaction of the solar wind, the magnetosphere, Earth's upper atmosphere and the structure of the resulting aurora," NASA said.

The other missions are expected to fly between Feb. 13 and March 3.