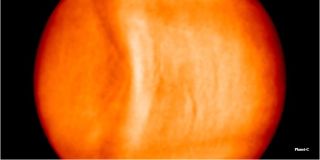 The latest weird cloud formation seen on Venus was spotted by the Japanese Akatsuki spacecraft. Recent research describes this formation as an "enormous bow-shaped bright region" that is 10,000 km (6,213 miles) long. It doesn't move with the rest of the clouds, but hovers over mountains on the planet's surface.

"The authors suggest that the bright region ... is the result of a gravity wave generated in the lower atmosphere as it flows over mountain topography — a phenomenon similar to when air passes over mountains on Earth," the researchers said. (Gravity waves are different than gravitational waves; the latter describe ripples in space-time.)

In 2014, scientists using the European Space Agency's Venus Express noted a strange feature known as a "glory", based on pictures taken three years beforehand. The image you see here is the first time a glory, described as a "rainbow-like feature," was ever captured on another planet.

"A glory requires two characteristics: the cloud particles are spherical, and therefore most likely liquid droplets, and they are all of a similar size," ESA wrote in a statement. "The atmosphere of Venus is thought to contain droplets rich in sulfuric acid. By imaging the clouds with the sun directly behind the Venus Express spacecraft, scientists hoped to spot a glory in order to determine important characteristics of the cloud droplets."

In ultraviolet wavelengths, a strange Y shape covers most of the planet and baffled astronomers for more than half a century. At first astronomers thought it was simply clouds in the wind, but observations with the Mariner 10 mission in 1973 showed that the Y was moving independently of the surrounding environment.

A 2015 study suggests that the wave happens due to centrifugal forces, which move stuff away from a rotating body's center of rotation. But other mysteries abounded. For example, astronomers tracked the movement of the Y using unknown compounds that absorb ultraviolet radiation.

Could the dark streaks in the clouds actually be microbial life? It's admittedly a far-out idea, but that's one answer scientists are considering when looking at Venus' environment. The United States and Russia are working together on a proposal called Venera-D that would deploy an orbiter and a lander to Venus around the year 2025. It would be the first time anybody has gone to the surface of Venus since the 1980s, when the Soviet Union sent the Venera spacecraft to its surface.

A recent NASA astrobiology article cautions there could be other explanations: "It could be particulate matter mixed into the clouds, or a substance that has been dissolved by the droplets of sulfuric acid, or perhaps crystalline in nature, like ice," read the article by Keith Cooper. "Iron chloride has been proposed, but there is no confirmed mechanism that could loft particles of iron chloride 50 to 60 kilometers above the surface, particularly as winds near the surface only blow weakly through the dense lower atmosphere."

5) Close link between surface and atmosphere

Admittedly, Venus is tough to observe because the thick clouds completely obscure the planet below. That said, scientists are coming to understand that by looking at the atmosphere, we can get a sense of what the surface environment is like. Observations from Venus Express between 2006 and 2012 showed that winds, water content and cloud composition were connected to the surface.

One example takes place over the Aphrodite Terra mountains, where water-rich air (from lower in the atmosphere) moves over the mountains in a process nicknamed the "fountain of Aphrodite." The scientists also found that water and ultraviolet-dark material in the clouds are more pronounced in certain areas above the equator.

WATCH VIDEO: There Could Have Been Life On Venus!