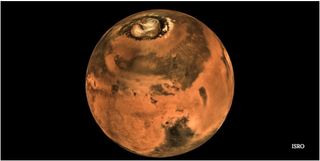 Images, but no methane measurements, from MOM.
(Image: © ISRO)

More than two years after its pioneering Mars Orbiter Mission (MOM) reached the red planet, the Indian Space Research Organization has yet to release highly anticipated measurements of atmospheric methane, a gas which on Earth is strongly tied to life.

Seeker has learned that the data will never come, due to a flaw in the sensor design.

"They did not design this properly for the detection of methane on Mars," Michael Mumma, senior scientist at NASA's Goddard Space Flight Center, told Seeker.

In 2003, Mumma led a team that made the first definitive measurements of methane on Mars using an infrared telescope in Hawaii. The methane, which appeared in plumes over specific regions of Mars, reached a maximum density of about 60 parts per billion.

"The (MOM) instrument is beautifully engineered, but not for the methane task. It has other value, but unfortunately they will not be able to provide measurements of methane at the levels needed to sample even the plumes we saw," Mumma said.

The problem has to do with how the instrument collects and processes detections of methane in the atmosphere, a technique known as spectroscopy.

"Imagine that you hold your hand in front of you and extend your four fingers … Suppose that each (finger) represents a methane line. What they have is a spectrometer that can be shifted to … sample each one of the four fingers and then they have a second one that samples the region between the fingers.

"The problem, of course, is that when you have other spectral lines … like carbon dioxide lines which vary widely with temperature in terms of their intensity, then those two numbers … don't represent methane alone. The net effect is that there is no way that one can back out those two signals in order to retrieve a methane signal," he said.

"It's really unfortunate because they succeeded so spectacularly well in placing the spacecraft into orbit at all, which was the major achievement for the first try," he added. "But the reality is we won't seeing any detections of methane from the Mars methane sensor on MOM."

Their findings were presented to the Indian space agency ISRO in February.

"I believe the resolution is that the Indians now agree that their methane sensor is better used for other purposes, so they are now calling this an albedo mapper and measuring reflected sunlight. It does that, and it does that well," Mumma said.

"The engineers know how to build a good instrument. That's not the issue. The problem is they didn't have the scientific guidance needed to tell them exactly what they needed to do," he said.

Seetha Somasundaram, with ISRO's Satellite Center which designed the instrument, declined to comment and referred Seeker to ISRO spokesman Deviprasad Karnik. Karnik did not responded to requests for comment.

Mumma and other scientists are now pinning their hopes on getting Mars methane measurements from Europe's newly arrived Trace Gas Orbiter.

Update (2 p.m. ET): ISRO spokesman Deviprasad Karnik emailed the following statement to Seeker: "The Methane sensor onboard MOM has been sending data about atmospheric Methane of planet MARS and the data received is under analysis." Karnik did not address questions about scientists' ability to ferret out methane signals from the data.