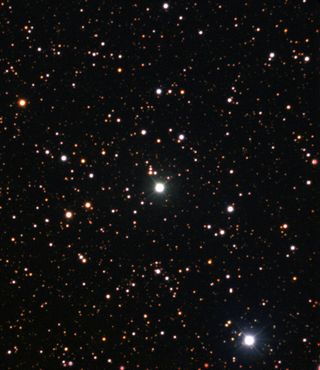 The first lithium ever found in a star explosion was pinpointed in this bright nova (center). Nova Centauri 2013, the exploding star, was captured in July 2015 by the New Technology Telescope at ESO's La Silla Observatory.
(Image: © ESO)

Paul Sutter is an astrophysicist at The Ohio State University and the chief scientist at COSI Science Center. Sutter is also host of Ask a Spaceman, RealSpace and COSI Science Now.

Imagine how surprised Danish astronomer Tycho Brahe would have been when he examined a "new star" that appeared in the sky in November 1572. Actually, you don't have to imagine it, because I'm about to describe it.

Of course, "new stars" had appeared and been noticed all throughout history, and their origins were always a source of wonder, confusion and argument. Comets were generally thought to be some sort of atmospheric phenomenon (perhaps the premodern equivalent of UFOs explained by "swamp gas and weather balloons"). And an occasional new star? Uh, how about a comet … without a tail? Sure, that works.

Either way, it was important to early European thinkers that messy stuff in the sky stayed in the sky, and not in the stars. In their worldview, the imperfect, dirty, messy, sloppy, Earthly realm stood in stark contrast to the mechanical clockwork perfection of the heavens. If something weird happened in the sky, they thought, it should be a part of Earth and not the celestial. [Know Your Novas: Star Explosions Explained (Infographic)]

So now we get to Brahe's surprise. Just before the dawn of the telescope age, his observatories provided the most precise measurements of the heavens possible with the unaided eye. One technique available to him for measuring heavenly distances was parallax — when nearby objects appear to move back and forth as a watcher switches viewpoints, while more distant objects hardly seem to move at all. Measure the back-and-forth, do a little trigonometry and voilà — you have a distance.

If the "new star" of 1572 was truly an atmospheric object, Brahe's observatory should have been able to measure its parallax. But it couldn't — the object was too distant — and Brahe was surprised. The new star was seated firmly in the heavens, embedded in the supposedly perfect and unchanging celestial realm.

Brahe described his observations in a manuscript with a sufficiently braggadocio title: "Concerning the star, new and never before seen in the life or memory of anyone." This work set off a revolution as astronomers grew to realize that stuff in space is not at all perfect and is actually kind of messy.

We now know that Brahe's "stella nova" ("new star") was actually a supernova, but for centuries, the Latin word "nova" was attached to anything new in the sky. It wasn't until the 1930s that stricter definitions were sorted out: If a star completely blew up, it was a supernova; if it didn't, it was a regular nova.

But even that wasn't enough, as modern observers discovered different classes of objects, mechanisms and processes that led to outbursts in the sky. "Supernova" got to stay "supernova," with newly labeled subtypes to indicate the specific astrophysical process, but "nova" was switched to "cataclysmic variable star," because… well, I don’t really know, but that's the world we live in.

When stars get fat

That longer name does serve at least one useful purpose, though: It indicates that something violent is happening to some stars to make them dramatically change their brightness. There are a few mechanisms that can cause the change, including the always-popular stars ramming into each other. But the most common scenario — and the situation that astronomers typically depict when the old term "nova" gets casually tossed around in hallway conversations — happens when two stars live together.

When stars are born together, one is more massive than the other. It could be by a little; it could be by a lot. But either way, the more massive of the duo will churn through its supply of hydrogen faster, as its increased gravitational pressure drives the fusion rate in its core to a frenetic pace. Meanwhile, the lower-mass sibling carefully sips at its fuel reserves, burning slowly and steadily.

With enough time, the larger star will run out of hydrogen, evolve into a red giant and briefly ignite helium. After violently spewing its layers of atmosphere into the surrounding system, it will finally settle down into a comfortable white-dwarf retirement.

The white dwarf — an unassuming ball of unfused and inert carbon and oxygen — can remain stable for trillions of years. That is, until its companion begins to undergo its own violent paroxysms.

Eventually, the smaller companion will run out of fusible hydrogen and enter its own end-of-life red-giant stage. If it were all alone in space, it would simply get larger. (Our own sun will likely engulf the Earth at this stage, but that's a different article.) But tied to its white-dwarf sibling in the binary system, the loosely connected outermost layers of the red giant's atmosphere can work their way onto the surface of the companion.

This slipping of gas from one star to another occurs via a so-called Roche lobe, a funnel-like extension of the red giant where the white dwarf's gravity starts to exert its influence. [Watch this video for more about Roche lobes.]

At first, this process is rather benign: The red giant's atmosphere of hydrogen simply accumulates on the white dwarf. Because the dwarf itself is made of heavy carbon and oxygen, the new supply of hydrogen doesn't really go anywhere, instead building up a thick blanket of material.

If the process stopped there, nothing interesting would really happen. But the process doesn't stop there.

At some point, the pressures on the bottom layer of hydrogen reach a critical point, and boom — the whole thing goes up in a single nuclear flash. If the detonation is sufficiently powerful to ignite carbon fusion, the whole white dwarf is consumed in a supernova, but if only the hydrogen layer goes off, it's a good old-fashioned regular nova.

Most of the time, such an explosion just happens once, with the white dwarf temporarily increasing in brightness by 50,000 to 100,000 times. But there are a few known cases of repeated events that we don't fully understand.

No matter what, the universe is a messy place.

Learn more by listening to the episode "How do (regular) novas work?" on the Ask A Spaceman podcast, available on iTunes and on the Web at http://www.askaspaceman.com. Thanks to @DesRon94 and Tim R. for the questions that led to this piece! Ask your own question on Twitter using #AskASpaceman or by following Paul @PaulMattSutter and facebook.com/PaulMattSutter.