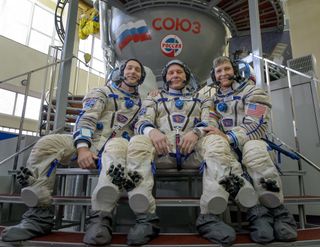 Three new crewmembers will begin their journey to the International Space Station today (Nov. 17) as they blast off on a Soyuz rocket, and you can follow their departure from Earth live online.

Today's launch will be a historic one for France, as astronaut Thomas Pesquet of the European Space Agency (ESA) will soon become the first French resident of the International Space Station (ISS). His crewmates, American astronaut Peggy Whitson of NASA and Russian cosmonaut Oleg Novitskiy, are ISS veterans. [Peggy Whitson: From Chicken Entrepreneur to Space Commander]

In a press conference, Whitson and Novitskiy both said they look forward to getting back to work inside the orbiting laboratory. Whitson said she's especially looking forward to the view from the station's observation deck-like Cupola, which was added in 2010 and is now the largest window on the space station. "I plan on hanging out in the Cupola window quite a bit," she said.

After the launch, the crew will spend two days chasing after the ISS in the Soyuz capsule. By Saturday (Nov. 19), they will arrive at the space station and begin docking at 5 p.m. EST (2200 GMT). There, they'll be greeted by the Expedition 49/50 crew — Shane Kimbrough of NASA and Roscosmos cosmonauts Sergey Ryzhikov and Andrey Borisenko — who arrived at the station in October.

The Expedition 50/51 crewmembers will spend six months inside the orbiting laboratory, where they'll conduct about 250 science experiments. Whitson said she also hopes to do some extravehicular activity, or "spacewalks," during her stay.