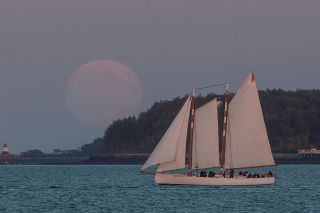 The supermoon rises over a sailboat in Boston Harbor on Sept. 27, 2015.
(Image: © Scott Eisen/Getty Images)

This month's bright supermoon — the closest full moon in 68 years — is expected to light up the sky early Monday morning, NASA reported.

Every year, scientists and skywatchers welcome the supermoon, which is the closest full moon of the year. But this year, the supermoon is receiving extraordinary attention.

"This one is historically close," said NASA scientist Noah Petro. "The moon hasn't been this close to the Earth since January of 1948." [Supermoon Photos: Full Moon Rises Across the Globe]

The moon travels in an oval-shaped orbit around Earth, but on average, the natural satellite is about 238,800 miles (384,400 kilometers) away, according to NASA. November's supermoon will venture a bit closer to the planet, leaving only 221,524 miles (356,508 km) between Earth and the moon, Live Science's sister site Space.com reported.  That distance is measured from the center of Earth to the center of the moon,

Granted, the space between Earth and the moon will still be vast — it's equivalent to the height of about 28 Earths — but the slightly closer approach will make a difference for skygazers. The moon is predicted to appear up to 14 percent larger and 30 percent brighter than the smallest full moon, Petro said.

While the casual observer may not notice a difference in brightness, people who regularly watch or photograph the moon will likely appreciate the "difference in size of the moon as it goes in its orbit around the Earth," Petro said.

The supermoon will be closest to Earth at 6:22 a.m. EST on Monday, but it won't be at its fullest until 8:52 a.m. EST, a time that's after "moonset" for most of the United States, NASA said.

But even if you miss that "full moon moment," the moon will be nearly full for most of Sunday night (Nov. 13) and even Monday night (Nov. 14), providing prime watching time for the public, Petro said.

He advised going to a dark viewing area to catch the lunar show. "Find a clear space where you're free, certainly of bright lights, but even [of] tall buildings or trees that will obstruct your view, especially when the moon is low in the sky," he said. "Later on at night, when the moon is high in the sky, any spot is going to be fine."

Petro noted that as the moon approaches its perigee (the point at which the satellite is closest to Earth), it will ever so slightly affect the ocean's tides and even the Earth's crust.

"We will see a slightly higher tide," Petro said in an interview with Space.com, adding that the closer approach will slightly deform the crust, the ground beneath your feet.

"[But] these are subtle differences that we actually wouldn't notice unless you were looking at them or measuring them," he said.

The next time the moon will be this close to Earth will be in November 2034, so mark that on your calendar, Petro said.