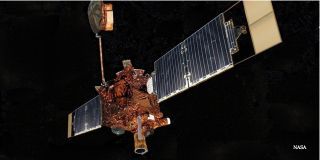 Mars Global Surveyor (MGS) was a landmark mission for its time. After launching 20 years ago on Nov. 7, 1996, the NASA spacecraft winged its way to the Red Planet, becoming the first new spacecraft to reach there since 1976. It survived in Mars orbit for 10 years until it died, likely because a routine position adjustment put a battery in direct sunlight and caused it to fail.

Although MGS is best remembered for its science — including spotting gullies that could have carved by ancient water — it also spotted quite a few spacecraft operating on and around Mars at the time. Here are some of its most notable images.

This image was taken shortly after the rover Opportunity landed in a tiny crater in January 2004, a feat that NASA dubbed a "hole in one" landing. You can see the rover peeking out of the crater near the top of the image, just north of the spot where the airbag-shrouded rover first bounced onto the surface. Nearby are the backshell and parachute from the landing, and the heatshield impact site is also visible.

RELATED: Watching the Sunsets of Mars Through Robot Eyes

Opportunity is about to make a daring descent into a much steeper crater following a remarkable 12 years on Mars. It has found evidence of ancient water, traveled more than a marathon's worth of mileage and slowly moved from crater to crater in its quest to understand more about the Martian past.

Spirit trundled along successfully for five years, and made discoveries such as finding evidence of ancient water flows on the surface, and tracking effects of the Martian wind (such at tracking Mars' enigmatic dust devils). The rover became mired in soft regolith in May 2009 and was unable to move to a sunny spot for the winter. After the rover failed to respond to commands, NASA formally ended the mission in May 2011.Taken just 85 Martian days after Opportunity's sister rover Spirit landed, the MGS saw the rover hard at work as it neared the end of its primary mission of 3 months. The tracks and the rover are just south of the informally-named Bonneville Crater. On the left of the image are the backshell and parachute impact sites, while you can see the heat shield impact just north of the crater.

This image of NASA's Mars Odyssey was taken in 2005, when the spacecraft had only spent a few years at Mars. Both Mars Global Surveyor and Odyssey were in almost perfect circular orbits that go around the Martian poles, sometimes coming as close as nine miles (15 kilometers) apart. (Odyssey was slightly higher than MGS to avoid crashing.) Along with pictures of Mars Express (below), this was one of the first orbiter-to-orbiter pictures taken at Mars.

Odyssey is the main communications relay for the Opportunity rover today and the newer NASA Curiosity rover, which landed in 2012. It's also made several scientific findings of its own. Among them include finding evidence of water ice just below the Martian surface, and taking pictures of Martian dust storms in 2007 and 2009.

This is a combination of two images of the European Space Agency's Mars Express spacecraft from several hundred kilometers away. It's a blur due to the distance and the apparent motion of Mars Express, but it's still a spectacular feat; along with pictures of Odyssey shown in the previous slide, these were some of the first orbiter-to-orbiter images taken at Mars.

Mars Express arrived in December 2003 along with a lander, Beagle, that didn't call back home after reaching the surface. Mars Express is still circling the planet and has made several discoveries, including tracking polar ice on he surface, taking pictures of the Martian moon Phobos, and detecting methane in the atmosphere.

In January 2000, Malin Space Science Systems — which operated MGS' Mars Orbital Camera (MOC) — released a series of images of the Sojourner rover and Pathfinder lander site. The camera could not pick up the landing hardware. "While the landing site of Mars Pathfinder can be identified, the lander itself cannot be seen," Malin Space Science Systems said at the time. "It is too small to be resolved in an image where each pixel acquired by the MOC covers a square of 1.5 meters (5 feet) to a side, given the contrast conditions on Mars and the MOC's ability to discriminate contrast."

Luckily, the Mars Reconnaissance Orbiter managed to image the site in 2006 and could see the rover and the lander. Sojourner was the first rover on Mars and was popularized again in the public's mind during the 2015 movie The Martian, which saw the rover being found again by main character Mark Watney (Matt Damon). One of the mission's major finds was discovering "conglomerate" rocks and pebbles, which were both signs of something (such as water) pushing the soil together in the past.