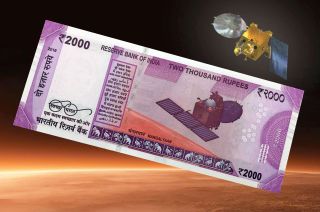 Three years (and five days) after it was launched to circle Mars, India's first interplanetary probe is now entering circulation on the back side of the country's new banknote.

The Reserve Bank of India on Tuesday (Nov. 8) revealed the new bill, part of the "Mahatma Gandhi (New) Series" of banknotes, which features an illustration on its reverse of the Indian Space Research Organization's Mangalyaan or Mars Orbiter Mission that was launched on Nov. 5, 2013. The bill has a face value of 2000 rupees (about $30 U.S.), making it India's highest denomination of currency. [India's First Mars Mission in Pictures (Gallery)]

The bill, which enters circulation on Thursday, immediately replaces India's ₹1000 banknote, which ceased being legal tender on Wednesday in an effort to combat counterfeiting.

"The new denomination has [the] motif of the Mangalyaan on the reverse, depicting the country's first venture into the interplanetary space," the Reserve Bank of India stated in a press release.

"The base color of the note is magenta [and it] has other designs, geometric patterns aligning with the overall color scheme, both at the obverse and reverse," the bank said.

The 6.5 inch by 2.5 inch (16.6 by 6.6 cm) bill features on its front the portrait of Mahatma Gandhi, the leader of the Indian independence movement when the country was still under British rule.

ISRO's Mars Orbiter Mission entered orbit around Mars on Sept. 23, 2014, following a ten-month journey from Earth, making it the 13th spacecraft in history to begin circling the Red Planet.

"India has become the first [country] to have made history by reaching Mars on its maiden attempt," Narendra Modi, India's prime minister, said after the probe was confirmed in orbit. "I congratulate the people of this country."

The $74 million (₹4.5 billion) mission was mainly intended as a technology demonstrator, designed to show that India could get a spacecraft to Mars. But the probe was outfitted with a camera and four scientific instruments to study the planet's surface and atmosphere.

During its first year in orbit, Mangalyaan returned data and images to comprise a 120-page scientific atlas. In March, the mission's first science results were published based on the measurements obtained of the Martian exosphere.

India has now become the third country to commemorate its success in space on its current paper currency.

In November 2013, the Bank of Canada began circulating a new $5 banknote featuring the Canadarm2 and Dextre, robotic arms and manipulators that were used to build and now maintain the International Space Station.

See the Reserve Bank of India’s flier promoting the Mangalyaan banknote at collectSPACE.