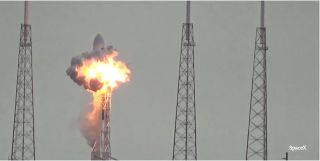 Investigators probing why a SpaceX Falcon 9 rocket burst into flames on its launch pad two months ago have found the smoking gun. They discovered that the rocket's liquid oxygen accidentally got so cold it became solid. That transformation, in turn, triggered a chemical reaction with a carbon composite container holding liquid helium that is located inside the oxygen tank.

The helium vessel's failure set off a series of explosions that destroyed the rocket and its payload, a $200 million communications satellite that it was due to carry into orbit two days later. The accident occurred as the rocket was being fueled for a routine, pre-launch engine test on Sept. 1.

SpaceX chief Elon Musk called the problem surprising and said it had never been encountered in the history of rocketry.

But it's not completely unexpected. A panel of highly respected aerospace experts told NASA eight months before the accident that the lack of a re-circulation pump aboard the Falcon rocket could be a safety problem.

"We are concerned that there may be insufficient pre-cooling of the tank and plumbing with (SpaceX's) current planned oxidizer fill scenario," former astronaut Thomas Stafford and members of the International Space Station Advisory Committee wrote in a December 2015 letter to NASA.

The letter was released on Friday.

"Without re-circulation there may be stratification of oxidizer temperature that will cause a variation in the input conditions to the oxidizer pump," the letter said.

NASA also has a bit of history with liquid oxygen behaving badly with a composite fuel tank, which was developed as part of the experimental X-33 spaceship in the 1990s.

"The composite tank experienced cracks when fueled in development tests. Composite was used to save weight. Never could overcome it technically, and contributed a lot to the program demise," Leinbach wrote in an email.

The Stafford letter raised the lack of a re-circulation pump as part of a broader safety concern about SpaceX's plan to fuel its rockets with astronauts aboard. All previous rockets used to launch humans have been fueled before a crew arrived at the launch pad.

SpaceX is one of two companies NASA has hired to fly astronauts to the space station beginning in 2018.

During a committee meeting last week, Stafford also questioned SpaceX's unorthodox practice of putting helium canisters inside the oxygen tank. The helium, which is part of pressurization system, typically is located outside of the oxygen tank.

SpaceX has not yet said what it will do to fix the fueling system issue, but Musk said Friday said he is aiming to return the Falcon 9 to flight in mid-December.