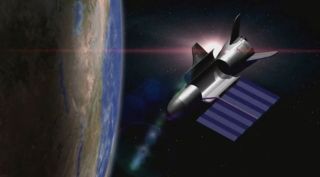 The orbiting lab hasn't had a suitable astronaut ambulance since the retirement of NASA's space shuttle fleet back in 2011, said former astronaut Stephen Robinson, who flew on four shuttle missions and currently chairs the mechanical and aerospace engineering department at the University of California, Davis.

For the past five years, Russian Soyuz spacecraft have been crewmembers' only means of getting to and from the ISS. The Soyuz — which launches from the Baikonur Cosmodrome in Kazakhstan and makes parachute-aided landings on the remote steppes of that Central Asian nation — is a dependable astronaut taxi, but it's far from ideal for transporting seriously sick or injured crewmembers back to Earth, Robinson said. [The Secretive X-37B Space Plane: 6 Surprising Facts]

"If somebody needs to come home soon from space, coming back on the Soyuz is going to be a pretty challenging ride — at least 4.5 Gs, fairly violent landing, and then you might not be very close to the medical care you need out in Kazakhstan," he said last month during a presentation with NASA's Future In-Space Operations (FISO) working group.

Halberg said that an effective astronaut taxi should, among other things, be able to stay at the ISS for two years or more at a stretch; be capable of getting people back to Earth rapidly, within three hours or so; impose minimal G-loads on occupants; have the ability to land close to a hospital; and allow patients to lie in a supine position.

These requirements all point to a space plane rather than a capsule, Halberg said — meaning SpaceX's Dragon capsule and Boeing's CST-100 capsule, which are scheduled to start flying NASA astronauts to and from the ISS within the next year or two, wouldn't make the grade as ambulances.

Another private crew-carrying vehicle that's currently in development, Sierra Nevada Corp.'s Dream Chaser space plane, is an intriguing option that bears further investigation, Robinson and Halberg said. But their initial concept study focused on the robotic X-37B, chiefly because the 29-foot-long (8.8 meters) military space plane has already racked up millions of miles in orbit, while Dream Chaser has yet to launch.

The X-37B launches vertically atop a rocket and glides in for a runway landing, just like the space shuttle used to do. The X-37B program is in the middle of its fourth space mission, which launched in May 2015. The vehicle's first three flights lifted off in April 2010, March 2011 and October 2012; they lasted for 225 days, 469 days and 674 days, respectively. These four missions have been flown by two different X-37B vehicles, both of which were built by Boeing. [The X-37B's Fourth Mystery Mission in Photos]

Exactly what the X-37B does on orbit for so long is unclear; the space plane's specific activities, and many of its payloads, are classified. Some people have speculated that the X-37B may be a space weapon of some sort, but the Air Force has always denied that idea, maintaining that the vehicle is just testing a variety of technologies for future spacecraft.

The astronaut-ambulance X-37B would be a bit different than the version that's currently zipping around Earth on its latest mystery mission. For starters, the proposed new variant would feature a pilot, as a backup for the autonomous system that currently operates the space plane, Halberg said. (There would still be no windows, though; the pilot would be flying a real-time simulator, without the need to see outside.)

The X-37B's payload bay would also be enlarged, from 88 cubic feet (2.5 cubic meters) to 147 feet (4.2 cubic m), to accommodate the pilot and two other people — the patient and a "crew medical officer." Furthermore, the medevac version would also use nontoxic fuel, as opposed to the currently employed propellant mix of nitrogen tetroxide and monomethyl hydrazine, Halberg said.

Robinson said he envisions the X-37B launching in an uncrewed state toward the ISS, perhaps loaded up with cargo. The vehicle would then stay at the orbiting lab for long stretches, ready to take sick or wounded astronauts down if needed. (No such emergency evacuations have yet been necessary in the 16 years that astronauts have lived aboard the ISS. The $100 billion orbiting lab is currently funded through 2024.)

But further details — such as where exactly the X-37B would land on its emergency missions — are sketchy. Turning the X-37B into an astronaut ambulance is just an idea right now, and there are no concrete plans to actually make it happen.

"We started with the inside of the spacecraft, and we're now starting to work towards the outside," Robinson said.