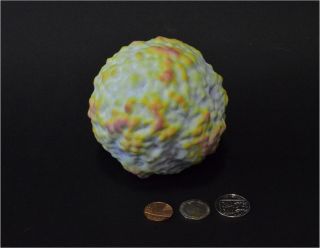 Have you ever wondered what the universe looks like in all of its entirety, or how it would feel to hold the universe in the palm of your hand? Good news: It is now possible to do both of these things — all you need is a 3D printer.

Researchers at the Imperial College London have created the blueprints for 3D printing the universe, and have provided the instructions online so anyone with access to a 3D printer can print their own miniature universe. You can see a video on the science behind the 3D-printed universe here.

The researchers' representation of the universe specifically depicts the cosmic microwave background (CMB), or a glowing light throughout the universe that is thought to be leftover radiation from the Big Bang, when the universe was born about 13.8 billion years ago. [Cosmic Microwave Background: Big Bang Relic Explained (Infographic)]

At first, the universe was a dense fog of plasma (a cloud of charged particles) and radiation. Once it expanded and became more transparent, the CMB was born. This happened 380,000 years after the Big Bang, the researchers said.

The CMB is the earliest radiation astronomers have detected in space. Although observers can't see it with the naked eye, measuring the CMB can reveal details about the structures in the universe, including temperature and density.

Red bits are warmer and denser than the cooler-colored regions and are "the seeds for the formation of structure," Clements explained. These areas clumped together through gravitational attraction to form the stars and galaxies seen today.

Clements and his team decided to 3D print the universe to get a better perspective of all the data about the CMB collected by the European Space Agency's Planck satellite, Clements said. Launched in 2009, the Planck satellite has been studying the early universe by measuring the CMB from orbit 930,000 miles (1.5 million kilometers) above the Earth.

Instead of sifting through intricate 2D maps of the universe, Clements and his team thought it would be easier to visualize the CMB in three dimensions, Clements said.

"Presenting the CMB in a truly 3D form that can be held in the hand and felt rather than viewed has many potential benefits for teaching and outreach work, and is especially relevant for those with a visual disability," Clements said in a statement.

A paper describing the process was published Oct. 28 in the European Journal of Physics. The files needed to print your own 3D miniature universe are free to download here.