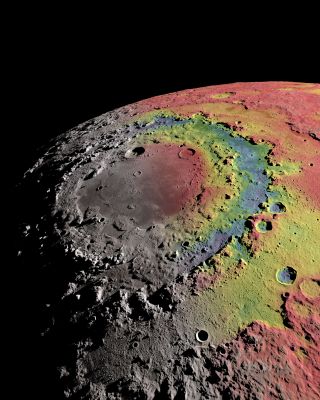 The bull's-eye-shaped Orientale basin is one of the largest and youngest craters on the moon. The biggest of the three concentric rings of rock around the crater's center measures about 580 miles (930 kilometers) in diameter. The colors in this image represent the strength of the moon's gravity field. Areas shaded in red have higher gravity, while areas in blue have the least gravity.
(Image: © Ernest Wright, NASA/GSFC Scientific Visualization Studio)

One of the biggest impact craters on the moon is mysteriously shaped like a three-ringed bull's-eye. After decades of deliberation, scientists said they may have finally figured out how those rings came to be.

The crater in question, called the Orientale impact basin, is located on the edge of the moon's near side, so the feature is barely visible from Earth. The crater formed about 3.8 billion years ago. Three concentric rings circle the basin, the biggest of which measures nearly 580 miles (930 kilometers) across. These strange circles have lacked a solid explanation until now.

To understand Orientale's rings, scientists needed to look deeper than the lunar surface and into the moon's interior structure. With the help of NASA's Gravity Recovery and Interior Laboratory (GRAIL) mission, they did exactly that. In two sister studies published today in the journal Science, researchers explained how they used data about the moon's gravity to get a look at the satellite's subsurface structure. They then used that information to model the impact that formed the crater to determine how the rings were formed. [The Greatest Moon Crashes of All Time]

"We use gravity to map the interior of a planet in ways somewhat analogous to an X-ray," said Maria Zuber, a geophysicist at the Massachusetts Institute of Technology who led the gravity field study. Because the interior of a planet or moon contains materials that vary in composition, temperature and density, and [because] the surface can have features like craters and mountains, the gravitational field around these objects is not the same all around, Zuber explained. So studying the variations in gravity around the moon can provide clues about what lies beneath the surface.

"In the past, our view of Orientale basin was largely related to its surface features, but we didn't know what the subsurface structure looked like in detail," Jim Head, a geologist at Brown University in Rhode Island, a GRAIL scientist and a co-author of the new research, said in a statement. "The beauty of the GRAIL data is that it is like putting Orientale in an X-ray machine and learning in great detail what the surface features correspond to in the subsurface."

Brandon Johnson, a geologist at Brown University and a co-author of Zuber's paper, led a second study to use the GRAIL data to determine how the rings at the Orientale basin formed. His study determined that an object about 40 miles (64 km) across traveling at a speed of about 9 miles per second (14 km/s) struck the moon.

The study also found that none of the rings at Orientale correspond with the transient crater, or the dent created by the initial impact. Instead, the rings formed via processes that occurred beneath the moon's surface in a reaction to the impact. [Mystery of Moon's Lumpy Gravity Explained]

"Warm material at depth collapses inward more easily than the material above it, and that pulls in the brittle crust along with that inflowing mantle material, causing the crust to kind of break into mega blocks that then give you these large fault scarps," or circular cracks in the surface, Johnson said.

The outer two rings formed via this process, but the inner ring, called the "inner rook," formed a bit differently, Johnson said.

When an impactor strikes a planet or a moon, the crust can sometimes rebound, leaving a mound of material in the center of the crater called the central peak. Orientale's central peak was large — several miles high — and unstable, so it collapsed within minutes of the impact. As the collapsing material flowed outward from the crater's center, it formed a circle of loose material, Johnson explained.

"Big impacts like the one that formed Orientale were the most important drivers of change on planetary crusts in the early solar system," Johnson said in a statement. "Thanks to the tremendous data supplied by GRAIL, we have a much better idea of how these basins form, and we can apply that knowledge to big basins on other planets and moons."

NASA's GRAIL mission sent two orbiter spacecraft to study the moon's gravity in 2011. The mission ended in 2012 after the orbiters swooped lower than 1.2 miles (2 km) above the Orientale crater to create the highest-resolution gravity map yet.

In the future, missions like GRAIL could help researchers study the gravity and internal structure of other bodies in the solar system, like Venus and Mars, Zuber said.

The two research papers, "Formation of the Orientale Lunar Multiring Basin" and "Gravity Field of the Orientale Basin from the Gravity Recovery and Interior Laboratory Mission," appeared today in the journal Science.

Correction: This article was corrected to reflect that the impactor was traveling at 9 miles per second, not 9 mph.