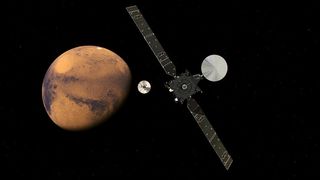 The European-led ExoMars 2016 project is scheduled to drop a probe onto the surface of the Red Planet this Wednesday (Oct. 19), and you can follow the mission's biggest events online, including a spacecraft separation on Sunday (Oct. 16).

ExoMars 2016  is a mission by the European Space Agency (ESA) and Russia that serves as a precursor to a Mars rover mission (with possible sample return) scheduled to launch in 2020. The current mission consists of the Trace Gas Orbiter (an orbiting satellite) and the Schiaparelli lander that will help test technologies for the future rover mission.

ESA will provide live coverage of three separate ExoMars events over the next week. The first will be the lander's separation from the orbiter on Sunday; the second will the lander's touchdown on Wednesday, and the third will be a mission status update on Thursday (Oct. 20).  [Gallery: Europe's ExoMars Missions in Pictures]

The agency will broadcast live coverage of the lander's separation from the orbiting spacecraft on Sunday, starting at 10:30 a.m. EDT (1430 GMT). You can watch that webcast via ESA's livestream player. You can follow the mission live on Space.com here, courtesy of ESA.

And finally on Thursday, the agency will webcast a press conference to deliver a mission status update, beginning at 4 a.m. EDT (0800 GMT).

You can look for text updates on the ExoMars mission at ESA's mission homepage. You can also follow the Twitter accounts for ExoMars, and the ExoMars orbiter.

Visit Space.com over the next week for complete ExoMars 2016 mission coverage leading up to the Wednesday arrival and landing.