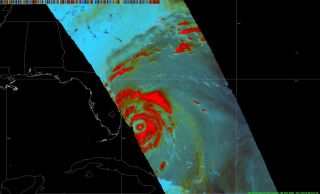 Powerful Hurricane Matthew has left NASA's Kennedy Space Center (KSC) in its wake, and the venerable spaceport is still standing.

"At this time, there is observed to be limited roof damage to KSC facilities, water and electrical utilities services have been disrupted and there is scattered debris," NASA officials wrote. "Storm surge has been observed to be relatively minimal, limited to localized portions of the space center." [Hurricane Matthew: NASA Satellite Reveals Layers Of Storm In 3D (Video)]

As of 9:45 a.m. EDT (1345 GMT) today, winds at KSC were declining but still had not dropped consistently below 58 mph (93 km/h) — meaning it was still too dangerous to send crews outside to perform a thorough damage assessment, the update added.

"The Damage Assessment and Recovery Team will be brought in for its formal assessment Saturday morning [Oct. 8]," NASA officials wrote.

NASA closed KSC yesterday (Oct. 6) and today to prepare for, and weather, Matthew. The spaceport has long been the launch center for NASA astronauts; the Apollo moon missions lifted off from KSC, for example, as did space shuttle flights to Earth orbit. KSC also manages launch activities for NASA robotic missions that lift off from Cape Canaveral Air Force Station, which is right next door on the Florida coast.

Meanwhile, new satellite views have revealed that Matthew has developed a larger central eye with a double "eyewall," which commonly occurs with powerful hurricanes. Eyewalls harbor intense thunderstorms with strong winds and heavy rains, so the addition of a second band means larger areas may get dumped on, NASA officials said.

Matthew is currently a Category 3 hurricane, with maximum sustained winds around 115 mph (185 km/hr), according to the latest update by the U.S. National Hurricane Center (NHC). As of 2 p.m. EDT (1800 GMT) today, the storm was 60 miles (97 km) southeast of Jacksonville, Florida, and moving north-northwest at 12 mph (19 km/h).

While Matthew has weakened a bit over the past day or so — it was a Category 4 storm yesterday, with winds around 140 mph (225 km/h) — the hurricane remains very dangerous, with the potential to wreak life-threatening havoc over a large swath of the southeastern United States, the NHC has warned. For more information and the latest updates, keep checking back with the NHC's Matthew page here: http://www.nhc.noaa.gov/graphics_at4.shtml?5-daynl