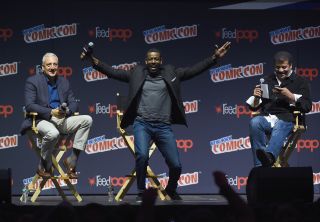 New York Comic Con is an annual convention held in New York City dedicated to comic books, movies, video games and other elements of pop culture. During the panel, Tyson talked about his show, "StarTalk," and the new accompanying book. Massimino explained what it's like to be an astronaut and promoted his new book, "Spaceman." Nice, whose space expertise comes mostly from cracking jokes while co-hosting "StarTalk," provided his usual sidesplitting commentary.

Tyson introduced Massimino as the show's in-studio space exploration expert and joked, "We make stuff up and then he corrects us, because he's actually been to space. He can tell you how to pee in space, you know, the urgent things." Nice interjected with, "the answer is: very carefully."

"StarTalk" was born in 2009 as a podcast funded by a grant from the National Science Foundation before becoming a radio show on SiriusXM and ultimately a National Geographic television series. When Tyson wrapped up his story about the birth of "StarTalk," Nice announced to the audience that Tyson's birthday was this Wednesday (Oct. 5) and led the crowd in singing "Happy Birthday." When asked how old he is now, Tyson responded jokingly,  "I was born the week NASA was founded… you do the math." (Hint: NASA was established in 1958.)

During the panel, Tyson played unaired clips from interviews he did for episodes of the new season of "StarTalk" on National Geographic. A clip from the Season 3 premiere showed actor Whoopi Goldberg explaining to Tyson that she wants superheroes to look a little bit more like her — and have a big butt. Another featured actor Isaac Wright from "Game of Thrones" reciting about 40 digits of pi.

The funniest "StarTalk" interview clip, which didn't make it into the television cut, showed actor Ben Stiller, a "Star Trek" fan, impersonating Captain Kirk in a fight. In the video, Tyson awkwardly embraces Stiller before falling victim to a double "Kirk chop."

Massimino, a regular guest on "StarTalk," told the story of how he became an astronaut — a journey which he detailed in his new autobiography, "Spaceman: An Astronaut's Unlikely Journey to Unlock the Secrets of the Universe." He talked about how "Star Trek" influenced his life, saying he has watched the show since age 4. At that age, however, he was more interested in becoming Spider-Man than an astronaut, Massimino said.

He spoke about his time aboard the space shuttle, and the conversation almost inevitably shifted to a popular question people have about living in space: How do astronauts go to the bathroom? You can read our detailed explanation of astronaut "potty training" here.

"StarTalk" returns to New York Comic Con tomorrow (Oct. 8) with a panel of "StarTalk All Stars," including Chuck Nice, astrophysicist Charles Liu, astronomer Emily Rice of the American Museum of Natural History and futurist writer PJ Manney. According to the New York Comic Con webpage, the panel will "discuss the science of Star Trek, comic books, and your favorite science fiction media."