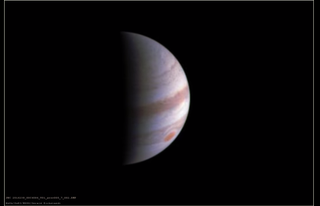 This image captures Jupiter as seen from Juno as it travels toward the gas giant.
(Image: © NASA/JPL/SwRI/MSSS/Gerald Eichstädt)

NASA's Juno spacecraft trekked 1.7 billion miles (2.8 billion kilometers) to reach Jupiter, and a new video by a NASA fan documents the probe's precise approach into orbit around the gas giant.

Juno arrived at Jupiter on July 4, 2016, after nearly five years of space travel. A belt of very intense radiation surrounds Jupiter and can quickly destroy spacecraft electronics, so Juno entered a very specific orbit around the planet to avoid the worst of the radiation.

The new time-lapse video was created by citizen scientist Gerald Eichstädt, using a compilation of JunoCam images taken between July 5 and Aug. 27, 2016, according to a statement from NASA. The video documents Juno's slow and steady voyage to Jupiter before the probe delves into orbit around the planet. [Photos: NASA's Juno Mission to Jupiter]

Upon arriving at the Jupiter system, Juno performed a risky maneuver in which it fired its main engine in a crucial 35-minute burn to slow down enough to be captured by Jupiter's powerful gravity. The first 1 and 30 seconds of the video show the long journey to Jupiter, when the planet hardly appears to change in size. The action begins in the last 25 seconds, which capture Juno's very rapid descent into the Jupiter system.

As part of its mission, Juno is carrying a camera called JunoCam, which is expected to capture Jupiter's polar regions in remarkable detail. So far, the probe is holding up its end of the bargain and delivered the first-ever photos of Jupiter's north pole on Aug. 27.

The Juno mission also includes mapping the planet's gravitational and magnetic fields, and characterizing its composition and interior structure. This information will help scientists learn more about how the planet formed.

Juno launched into space in August 2011 and is only the second spacecraft to perform a long-term mission at the Jovian giant after the Galileo spacecraft of the 1990s and 2000s. The probe is expected to orbit Jupiter 37 times before the mission comes to a close in February 2018.