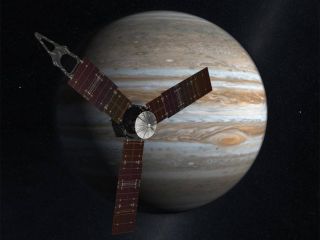 A depiction of the Juno probe arriving at Jupiter.
(Image: © NASA)

NASA's Juno probe is only one week away from its arrival at Jupiter, where it will execute a daring maneuver in order to get closer to the giant planet than any other spacecraft in history.

Getting up-close and personal with Jupiter is a serious challenge for space probes, because the Jovian giant is surrounded by a belt of very intense radiation that can quickly fry most spacecraft electronics. So rather than orbiting the planet, Juno will make a series of 37 loops between Jupiter and the radiation ring.

On July 4, Juno's engines will burn for about 35 minutes to slow down the probe so it can enter into its loopy orbit in the Jupiter system. But if the maneuver doesn't go as planned, Juno could fly right past Jupiter, putting an end to the $1.1 billion mission. [Photos: NASA's Juno Mission to Jupiter]

Getting to know Jupiter

"We think that giant planets like Jupiter are the cornerstones of planet formation," reads a section of the Juno mission website. "These planets were assembled early in the process, before their young stars had the chance to absorb or blow away the light gases in the huge cloud from which they were born. Giant planets also play a big role in planet formation because their huge masses allow them to shape the orbits of other objects in their planetary systems, such as other planets, asteroids, and comets."

As Juno skims through the area between Jupiter and the radiation belt, it will take precise measurements of Jupiter's gravity and magnetic field. The strength of a planet's gravity can help reveal its precise mass, and a planet's magnetic field hints at its composition. All of that information can help scientists learn about a planet's history, and Juno scientists hope to answer questions about when Jupiter formed, and if it has always been orbiting the sun in about the same place.

"Competing formation theories make different predictions about the content and mass of Jupiter’s core, so measuring the core will allow us to eliminate ideas that are wrong," the Juno website reads.

Juno will also send back a few dazzling snapshots of Jupiter. It is equipped with cameras to image the giant planet in visible light, as well as in infrared and ultraviolet light. The latter two instruments, along with other instruments on Juno, will be used to study the composition of Jupiter's atmosphere; scientists are particularly interested in the water content of the planet's atmosphere.

"Determining the amount of water — and therefore oxygen — in the gas giant is important not only for understanding how the planet formed, but also how heavy elements were transferred across the solar system," the mission website says. "These heavy elements were crucial for the existence of rocky planets like Earth — and life. Since Jupiter is the best example of a gas giant that we have, learning its history will help us understand the hundreds of giant planets we’ve discovered orbiting other stars."

The science instruments are tucked away inside a 400-pound (180 kilogram) titanium vault that will protect them from the radiation around Jupiter. Eventually the probe will make tight, 14-day-long orbits through the system, and get as close as 2,700 miles (4,350 kilometers) to Jupiter's cloud tops.

But that's only if the July 4 arrival goes as planned. By the time Juno reaches Jupiter, it will be traveling faster than any human-made object has ever gone — more than 40 miles per second (64.3 km/s), which is 144,000 miles per hour (231745.536 km/h), according to NASA officials. To slow down and enter into orbit near Jupiter, "Juno’s engines need to fire at just the right moment and in just the right direction for just the right amount of time," according to the mission website.

"It's a one-shot deal. I mean, the whole thing's riding on this JOI — Jupiter orbit insertion — activity on July 4," Scott Bolton, Juno's principle investigator at the Southwest Research Institute in Boulder, Colorado, said in a news conference on June 16. "Somebody asked, 'When does the nail biting start?' It's already started."