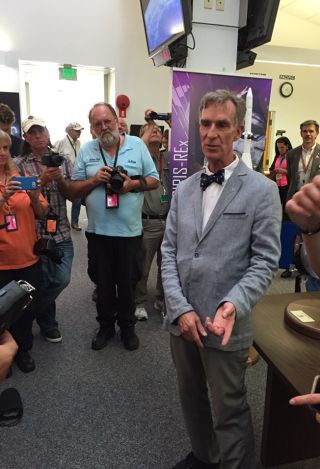 Bill Nye has some advice for Donald Trump and Hillary Clinton: Don't rock the space boat.

Whoever becomes the next American president should let NASA keep building on the progress it's been making over the past few years, said Nye, the former TV "Science Guy" and current CEO of the nonprofit Planetary Society.

"The whole thing we really advocate for is not resetting," Nye said Sept. 8 at NASA's Kennedy Space Center in Florida, where he had dropped in to celebrate that day's launch of the agency's OSIRIS-REx asteroid-sampling spacecraft from nearby Cape Canaveral Air Force Station. [Launch Photos: NASA's OSIRIS-REx Asteroid Mission Blasts Off]

"Let's not start over," Nye added, noting that NASA has had to do just that several times in the last few decades (after the cancellation of the moon-oriented Constellation program in 2010, for example). "Let's use the existing hardware."

The existing hardware will soon include the Orion capsule and the Space Launch System (SLS) megarocket, both of which NASA is building to send astronauts to Mars and other deep-space destinations. (Orion has already launched on one uncrewed test flight, in December 2014, while the maiden flight of SLS is scheduled for late 2018.)

NASA aims to get people to the vicinity of the Red Planet by the end of the 2030s, but Nye said he'd like a more concrete commitment.

Such "good orbits" — in which Mars and Earth are aligned properly to make a human mission feasible — come along just once every 26 months.

The Planetary Society backs an "orbit-first" approach to crewed Mars exploration, in which humans would first circle the Red Planet on a shakeout and scouting mission; a subsequent launch would then put boots on Mars.

NASA could realistically launch astronauts toward Mars obit in 2033, provided its budget is adjusted to keep up with inflation, Nye said. The 2028 target is achievable with a slight budget increase and some international cooperation, he added.

The powerful SLS may also be used to loft robotic spacecraft, thereby slashing travel times to distant targets, Nye pointed out. For example, NASA's planned mission to Jupiter's ocean-harboring moon Europa could make the trip in just 2 years with the aid of SLS, compared to 6.5 years with currently available rockets, SLS's builders have said.

Nye declined to endorse either Clinton or Trump. But he did urge people to vote for the candidate who they felt would be better stewards of the Earth.

"We live in a very special place," Nye said, contrasting the lush and temperate Earth with blistering-hot Venus and dry, frigid Mars. "So when it comes to evaluating for whom to vote, I encourage everyone to take the environment into account. Whom do you think has the better environmental policy?"

He mentioned climate change as a serious environmental issue, saying that people who deny that humanity's carbon-dioxide emissions are behind rising global temperatures are "absolutely wrong."

Clinton has pledged to reduce the impacts of human-caused climate change, for what it's worth, whereas Trump has called the phenomenon a hoax and a scam.

Editor's note: This story was updated to clarify the nature of the "good orbits" that allow feasible Mars missions. Such missions do not launch when Earth and Mars approach each other most closely, but rather when the two planets are aligned such that a spacecraft can make the trip most efficiently (using the least amount of propellant).