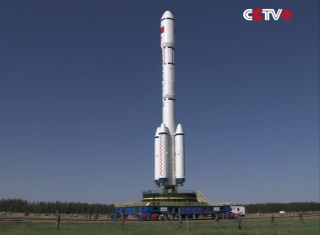 China's next space laboratory — Tiangong-2  – is being prepared for a mid-September launch from the country's Jiuquan Satellite Launch Center, according to state-run media reports.

The launch of the uncrewed space module is set to occur between Sept. 15 and Sept. 20, according to a CCTV report. Tiangong-2 and its Long March 2F rocket have already rolled out from an assembly building along a 1.5-kilometer-long seamless rail track, with the rocket being covered by the tower on the launch site. Video from the CCTV+ shows the rocket and Tiangong-2 on the launchpad.

As China's second orbiting space lab, Tiangong-2 is a part of the Project 921-2 space station program, with the goal of creating a third-generation space station.

In October, China will launch two still-unnamed astronauts on the Shenzhou-11 mission to link up with the Tiangong-2. The visiting crew would stay onboard the module for 30 days, marking China's longest human spaceflight to date.

Next year, Tiangong-2 is to be visited by China's first robotic refueling and cargo vessel, Tianzhou-1. That unpiloted cargo ship is scheduled to launch in the first half of 2018 atop a Long March 7 rocket that will lift off from China's new Wenchang Satellite Launch Center spaceport on Hainan Island.

All this action is prelude to China's progression to a larger, 60-ton modular space station for the 2020s.

The core module for the Chinese space station — Tianhe-1 — is reportedly due for launch in 2018, hurled into orbit by China's heavy-lift Long March 5 booster. That rocket is set to make its maiden flight next month, departing from Wenchang.