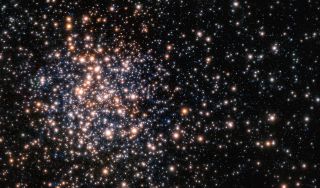 The star cluster Terzan 5 is imaged here with the European Southern Observatory's Very Large Telescope, using data from the new Multi-Conjugate Adaptive Optics Demonstrator, which reveals a surprising mix of older and newer stars within the cluster. The star colors come from a Hubble image of the star field.
(Image: © ESO/F. Ferraro)

A cluster of stars 19,000 light-years away — in our backyard, in galactic terms —is revealing clues about what our galaxy was like eons ago, when it was just forming from great clouds of gas.

Astronomers working with data from the Multi-Conjugate Adaptive Optics Demonstrator, an instrument at the European Southern Observatory's Very Large Telescope in Chile, looked closely at a globular cluster called Terzan 5, in the constellation Sagittarius. They found that the cluster has two different kinds of stars, with differing compositions and ages nearly 7 billion years apart.

That discrepancy suggests that the two groups of stars in the cluster formed in two big bursts of activity. As such, Terzan 5 had to form from a very large cloud of gas, or else there wouldn't have been enough material left over to form stars twice, the researchers reported in a new study.

The mass of the original gas cloud would have to be "at least 100 million times the mass of the sun," Davide Massari, an astronomer at the University of Groningen in the Netherlands and a co-author of the new study, said in a statement.

Scientists think that, billions of years ago, clouds of gas formed the first clusters of stars in the Milky Way galaxy, and that the interactions among gas, stars and dust formed the galaxy's central "bulge," which is thought to be much older than the newer areas in the spiral arms, where the sun is located.

That's why Terzan 5 is so interesting: The cluster shares a lot of characteristics with the bulge, meaning that it, too, is likely very old, said Francesco Ferraro, an astronomer at the University of Bologna in Italy and lead author of the study.

"Terzan 5 could represent an intriguing link between the local and the distant universe — a surviving witness of the galactic bulge assembly process," Ferraro said in the statement.

The study appeared in The Astrophysical Journal on Sept. 6.