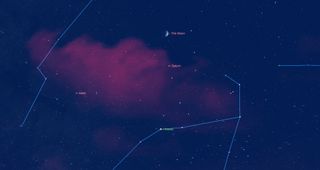 The first-quarter moon will form a triangle with Mars and Saturn Sept. 8, 2016, in the southwestern evening sky. The moon will be 3 degrees over Saturn and Mars will be 10 degrees to the left, the width of a fist. The red star Antares will sit below them.
(Image: © Starry Night Software)

Check the sky Thursday and Friday nights for the three "most asked for" objects that skygazers look for in a telescope — as the moon passes by Saturn and then Mars.

Pull out your telescope if the weather is clear in your area on Thursday (Sept. 8) and Friday evenings (Sept. 9). About an hour after sunset on Thursday, about one-quarter of the way up in the southwest sky, you'll see an almost first-quarter moon, 45 percent illuminated by the sun.

And if you look about 2 degrees below the moon, you'll see a bright "star" shining with a steady, yellow-white glow. Except that's not a star, but the ringed wonder of the solar system, the planet Saturn. [Planets, Constellations and a Solar Eclipse In September 2016 Skywatching (Video)]

Of course, the moon is nowhere near Saturn in actual miles. The moon is 249,900 miles (402,175 kilometers) from Earth, but Saturn is 938.9 million miles (1,510.7 billion km) away on that night. Or, put another way, Saturn is more than 3,700 times farther out in space than the moon. Nonetheless, on Thursday both objects will be conveniently placed near one another in the early-September evening sky. The moon's placement in the sky relative to Saturn makes it quite easy for neophytes to identify this wondrous world.

Both the moon and Saturn will be available for viewing until they set around 11 p.m. local daylight time.

Without question, Saturn is the showpiece of the night sky. Its famous rings can be glimpsed with a magnification of 30-power or higher and currently the rings are tilted 26.2 degrees to our line of sight. The rings consist of billions of particles ranging in size from dust specks to chunks measuring perhaps 30 feet across made of — or encrusted with — water ice. The ancients regarded Saturn as the "highest" planet, occupying the outermost or highest sphere before that of the fixed stars.

On Friday, it will be another planet's turn to be visited by the moon:  Mars. Mars is known as the Red Planet, but it actually appears to glow more of a yellow-orange hue, the color of sandy deserts. The color comes from rusting iron oxide, like the colors in Arizona's Painted Desert. But Mars' fiery color still won the planet its name: The color reminded people of blood, and so the planet was named for the god of war.

Friday is also the evening of the first-quarter (half) moon. About 8 degrees below the moon this evening you will find Mars, which continues to steadily draw farther away from Earth. On Sept. 1, yellow-orange Mars blazed at -0.3 magnitude at a distance of 83.3 million (134 million km) miles from Earth. But by month's end, it will be 15.5 million miles (nearly 25 million km) farther away from us and consequently will have noticeably dimmed to magnitude +0.1, or only about one-sixth as bright as it appeared back on Memorial Day.

Finally, don't forget to also look for Antares, the so-called "rival of Mars," which sits about 6 degrees below Saturn and forms a nearly straight line with the moon and Saturn on Thursday evening. Antares is a supergiant star that glows a distinct red color, much more so than yellow-orange Mars. That's why Antares is Mars' rival regardless whether it's dimmer (as it is now) or brighter than the planet. Antares in Greek means "anti Ares." Ares was the Greek equivalent of the Roman moniker, Mars.