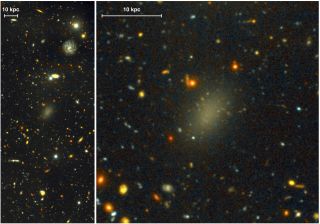 Astronomers have discovered a galaxy as big as the Milky Way that consists almost entirely of dark matter, a mysterious and invisible substance that scientists have been trying to figure out for decades. Only one-hundredth of one percent of the galaxy is ordinary, visible matter like stars and planets. The other 99.99 percent of the stuff in this galaxy can't be seen.

This dark galaxy, named Dragonfly 44, was first detected in 2015, through the use of the Dragonfly Telephoto Array in New Mexico. With a combination of eight telephoto lenses and cameras, the array is designed to look at objects in space that aren't bright enough to see with other telescopes. [Dark Matter and Dark Energy: The Mystery Explained]

Dragonfly 44 is one of 47 ultradiffuse, or "fluffy" galaxies that Pieter van Dokkum of Yale University and colleagues found in the Coma Cluster, a group of at least 1,000 galaxies around 300 million light-years from Earth. This distance is easily close enough for a telescope to see; the Hubble Space Telescope can see billions of light-years away. But no one had noticed these galaxies hiding in the dark before. Dragonfly 44 was one of the largest and brightest galaxies they found. While it's as big as the Milky Way, it only emits about 1 percent as much light.

Van Dokkum and his team later realized that there was something very odd about Dragonfly 44: a galaxy that big couldn't possibly hold itself together with so few stars. There wouldn't be enough gravity, and the stars would drift apart. They suspected that dark matter was responsible for holding the galaxy together, and this particular galaxy seemed like it contained a ton of it, so they set out to determine exactly how much.

To investigate the amount of dark matter in Dragonfly 44, the team turned to one of the largest telescopes on Earth, located at the W. M. Keck Observatory in Mauna Kea, Hawaii. They used a tool on the Keck II telescope called the Deep Imaging Multi-Object Spectrograph (DEIMOS) to study the movement of stars in the galaxy.

“Motions of the stars tell you how much matter there is," van Dokkum said in a statement. “They don’t care what form the matter is, they just tell you that it’s there. In the Dragonfly galaxy stars move very fast. So there was a huge discrepancy: using Keck Observatory, we found many times more mass indicated by the motions of the stars, than there is mass in the stars themselves.”

In other words, van Dokkum and his team found evidence of way more mass than they could actually see. Only 0.01 percent of the galaxy is made of ordinary, visible matter: stuff that is made of atoms containing protons, neutrons and electrons. But the other 99.99 percent of Dragonfly 44's mass is the ever-elusive dark matter. Of all the stuff in this Milky Way-size galaxy, we can see almost nothing.

"This has big implications for the study of dark matter," van Dokkum said. "It helps to have objects that are almost entirely made of dark matter so we don't get confused by stars and all the other things that galaxies have. The only such galaxies we had to study before were tiny. This finding opens up a whole new class of massive objects that we can study."

A dirty smudge in space

The team then went to the Gemini Observatory, also in Mauna Kea, to take new photos of Dragonfly 44. Using the Gemini Multi-Object Spectrometer (GMOS), they created a color image of the galaxy. The dim, spheroidal galaxy looks a bit like a dirty smudge on a photo of deep space.

New images from GMOS also revealed a halo of star clusters similar to the halo around the Milky Way. Some researchers believe that dark matter could be responsible for light halos around galaxies. If true, this means that dark matter might not be perfectly dark at all.

“Ultimately what we really want to learn is what dark matter is,” van Dokkum said. “The race is on to find massive dark galaxies that are even closer to us than Dragonfly 44, so we can look for feeble signals that may reveal a dark matter particle.”