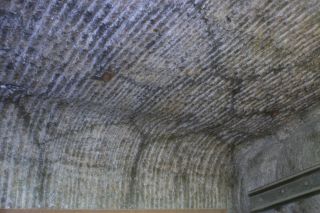 Walls of the Boulby Mine boast salty honeycomb-like hexagonal patterns that are similar to those that rovers like Curiosity have observed on Mars.
(Image: © Charles Cockell)

While NASA discusses how to one day send humans to Mars, a group of scientists has delved more than a half-mile (1.1 kilometers) beneath the Earth's surface to study nearby environments that resemble those of the Red Planet.

For the last four years, astrobiologists with Mars Analogues for Space Exploration (MASE), a program that is funded by the European Science Foundation, have been studying the underground environment of England's Boulby Mine — a place that appears to bear some similarities to Mars.

The new work, which includes analyzing salty features on the walls of the mine, will help scientists understand where to look for life on the Red Planet and how to explore the Martian environment when humans eventually get there, Charles Cockell, scientific coordinator of the MASE program, told Space.com. [Amazing Mars Photos by NASA's Curiosity Rover (Latest Images)]

Signs of an ancient sea

The Boulby Mine is a very large underground system that stretches for more than 621 miles (1,000 kilometers) out under the North Sea. The walls of the mine are coated in salty honeycomb-like hexagonal patterns that are believed to have formed 250 million years ago, after a giant inland sea (the Zechstein Sea) dried up. Similar evidence of a long-gone ocean has been found in other places on Earth, including Death Valley.

The prominent hexagonal features found on the walls of the mine resemble those that rovers like Curiosity have observed on Mars. This is the first time that Cockell and his team have collected samples of the salty features.

"On Mars, areas of salt have also been observed and they have similar sorts of features," said Cockell, who is also a professor of astrobiology at the University of Edinburgh. "So, this is indicative of large salt deposits on Mars that have dried out."

When seawater dries up, it leaves behind an oxygen-deprived environment in which only microorganisms tolerant of high-salt conditions can live, Cockell explained.

"We're interested in trying to isolate novel microbes from extreme environments and then use them to understand the limits of life in anaerobic, oxygen-free conditions," said Cockell. "Going into deep, subsurface [environments] is a good place to look for these kinds of deep-dwelling microbes."

The MASE researchers have collected multiple samples from deep inside the mine and will be analyzing the samples for signatures of life over the course of the next two or three months. The six-member team consisted of researchers from the Spanish Center for Astrobiology and the University of Edinburgh. While the MASE team was cultivating salty rock samples, a team of researchers from the University of Leicester was also in the mine developing new instruments for detecting minerals on Mars.

"The main thing is they [Mars and the Boulby Mine] are similar environments, and what we are really trying to do is understand as much as we can about Mars by looking at these types of environments on Earth," Cockell said. "[The Boulby Mine] is one of the best environments we have to do these kinds of comparisons."