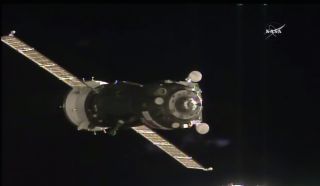 "They're exploring the option of going down to two crew on the Russian segment. They've made that known to the partnership," Kenny Todd, NASA's space station operations integration manager, said during a media briefing Monday.

The proposed crew reduction might be a cost-saving measure for the Russian space agency, known as Roscosmos, according to Russian news reports.

Russia and the U.S. have both committed to maintain their current level of support for the station through 2024, and "there is no doubt that they're keeping that in mind as they work through whatever challenges they have within their system," Todd said.

The space station has been continuously occupied by humans since 2000, and typically hosts a crew of six: three Russian cosmonauts, two American astronauts and one astronaut from another primary station partner — Canada, Japan or one of the 11 countries that belong to the European Space Agency (ESA).

The number of people aboard the station can fluctuate during crew change-overs. The largest population ever on the orbiting lab at one time was 13, which occurred during visiting NASA shuttle missions.

During Monday's media briefing (which was held to discuss a NASA spacewalk scheduled for Friday, Aug. 19), Todd said of the Russian crew reduction, "At this point it's strictly a proposal they put on the table, and we'll look at it."

"As we do with all these kinds of things, we'll trade it against whatever risk it might put into the program," he said. "First and foremost, the risk to our crew on board and the station itself. And then from there we start looking at the options and see what we can do as a partnership to try to either accommodate it, or help them realize why that's a bad thing."