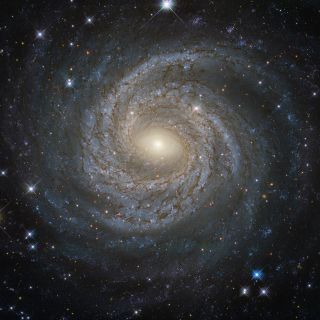 Galaxies such as this spiral, known as NGC 6814, are held together by mysterious dark matter.
(Image: © ESA/Hubble & NASA; Acknowledgement: Judy Schmidt)

There may be a fifth force of nature, a new study suggests.

"If true, it's revolutionary," study lead author Jonathan Feng, a professor of physics and astronomy at the University of California, Irvine, said in a statement.

"For decades, we've known of four fundamental forces: gravitation, electromagnetism, and the strong and weak nuclear forces," Feng added. "If confirmed by further experiments, this discovery of a possible fifth force would completely change our understanding of the universe, with consequences for the unification of forces and dark matter." [8 Baffling Astronomy Mysteries]

The Hungarians detected tantalizing evidence of a previously unknown particle just 30 times heavier than an electron — a result they published early this year.

"The experimentalists weren’t able to claim that it was a new force," Feng said. "They simply saw an excess of events that indicated a new particle, but it was not clear to them whether it was a matter particle or a force-carrying particle."

The new work by Feng and his team suggests that the Hungarians found not a "dark photon" but rather a "protophobic X boson" — a strange particle whose existence could indicate a fifth force of nature. The known electromagnetic force acts on protons and electrons, but this newfound particle apparently interacts only with electrons and neutrons, and then only at very short distances, researchers said.

"There’s no other boson that we've observed that has this same characteristic," co-author Timothy Tait, also a professor of physics and astronomy at UC-Irvine, said in the same statement. "Sometimes we also just call it the 'X boson,' where 'X' means unknown."

The potential fifth force may be linked to the electromagnetic and strong and weak nuclear forces, as "manifestations of one grander, more fundamental force," Feng said.

"It’s possible that these two sectors talk to each other and interact with one another through somewhat veiled but fundamental interactions," Feng said. "This dark-sector force may manifest itself as this protophobic force we're seeing as a result of the Hungarian experiment. In a broader sense, it fits in with our original research to understand the nature of dark matter."

While such speculation is intriguing, the researchers stressed that their interpretations are preliminary, and that further study and experiments are needed. Indeed, particles supposedly observed in accelerators sometimes turn out to be statistical flukes.

The good news is that many scientists should be able to do the required follow-up work, Feng said.

"Because the new particle is so light, there are many experimental groups working in small labs around the world that can follow up the initial claims, now that they know where to look," he said.

The new paper has been published in the journal Physical Review Letters. You can read a copy for free at the online preprint site ArXiv.org: http://arxiv.org/abs/1608.03591