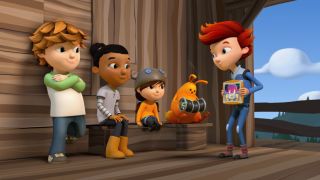 The adventurous space explorer Jet Propulsion and his Earthling friends head into outer space to learn about Jupiter and Pluto in new episodes of the animated series "Ready Jet Go!" airing this week (Aug. 15-19).

The educational show premiered in February 2016 on PBS, and it follows Jet Propulsion and his family, who are natives of the fictional planet Bortron 7. Their car transforms into a rocket ship to take Jet, his pet named Sunspot, and his friends Sean and Sydney into space to learn about the solar system.

In one of the upcoming episodes, "So Many Moons," the kids travel to Jupiter to count that planet's many moons.

Jupiter, the largest planet in the solar system, has 67 moons, and the kids want to know how these satellites manage to orbit in harmony, as well as how they differ from one another. While many of the moons look similar, Jet highlights three that have stark differences: Ganymede, Europa and lo. [Rare Photos: Jupiter's Triple-Moon Conjunction in Pictures]

Ganymede is not only Jupiter's largest moon, but also the largest satellite in the solar system. While most of Jupiter's moons are small, the planet has four incredibly large moons known as the Galilean satellites: Io, Europa, Ganymede and Callisto. Contrasting with the icy surface of Europa, lo is covered in volcanoes and lava lakes.

The kids study the moons of Jupiter because Mindy — another one of Jet's friends, who is too young to go into space with the others — may be getting a new baby brother or sister. Mindy is nervous about her parents not being able to tell her apart from a new sibling, but is reassured when the kids learn how Jupiter keeps track of its many moons.

In another new episode, "Project Pluto," the kids learn what it takes to be a planet and why Pluto was reclassified as a "dwarf planet." Sean's scientist mother, Dr. Rafferty, explains that there are three things that qualify a planet as a planet: It orbits the sun, has enough mass to assume a round shape and can "clear the neighborhood" around its orbit.

While Jet, Sean and Sydney provide a good argument for why Pluto should be considered a planet, the small dwarf planet falls short in the last criteria. Dr. Rafferty explained that this means Pluto is not gravitationally dominant and is unable pull in or push away other nearby celestial objects in its orbital path.

Even though Mindy had her heart set on using small Pluto for her papier-mâché planet project for school, she decides to reconstruct Saturn instead.

"Ready Jet Go!" aims to educate children about science and space. At the end of each episode, astronomer Amy Mainzer hosts a fun and informational segment. Five new episodes are set to air this week, Aug. 15-19, on PBS KIDS. Here is a schedule:

Check local listings for specific times, and check the PBS KIDS website to learn more about the show.