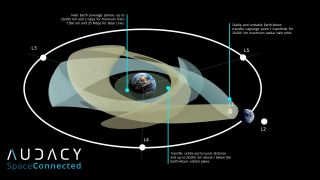 A new company aims to provide the communications capacity required for the ongoing private spaceflight revolution.

Around Aug. 1, California-based Audacy plans to close a Series A fundraising round of at least $15 million to begin creating three satellites and two Earth stations. The goal is to raise four major rounds of funding, build the ground stations and get the satellites launched by 2019. All told, the plan will cost about $750 million — $250 million in funding and $500 million more in government-backed debt, Audacy representatives said.

The three satellites could support perhaps 2,000 tiny cubesats, all working at the same time, anywhere in Earth orbit. Alternatively, Audacy could have up to 12 high-capacity customers and perhaps 1,000 smaller ones sharing the bandwidth simultaneously. [CubeSats: Tiny, Versatile Spacecraft Explained (Infographic)]

If all goes well, the company hopes to break even in 2023. In the future, if the demand is there, Audacy's infrastructure could also support some moon missions, because the ground stations could reach that far. (On average, the moon is about 240,000 miles, or 390,000 kilometers, from Earth.)

According to Audacy CEO Ralph Ewig, this capacity will let the company help Earth-observation companies (such as Urthecast or Planet Labs) send back data to customers, help spacecraft-launching firms keep a better eye on their rockets or help internet service providers keep track of large constellations of satellites.

"There will be a large number of LEO [low Earth orbit] spacecraft in the next couple of years," Ewig told Space.com, adding that there will be anywhere from 2,000 to 6,000 satellites launching in the near future.

Ewig's goal is to provide a network similar to NASA's Tracking and Data Relay Satellite (TDRS) system, which was built for the space shuttle and is now used for the International Space Station (ISS) and for supporting robotic cargo ships, such as SpaceX's Dragon capsule.

The first customers should then sign on shortly afterward, Ewig said, provided that customers are assured that the satellites are being built, that there's a rocket to launch them on and that radio regulations are being cleared with the Federal Communications Commission.

Audacy plans to build the ground stations in the San Francisco Bay Area and Southeast Asia, which should provide almost constant communications with the planned satellites. Eventually, a third ground station could be built in Europe.

Ewig first thought of this idea when he had access to TDRS, as a mission operations engineer for SpaceX's Dragon spacecraft. TDRS doesn't have the capacity to support hundreds of new launch providers, and neither does the existing network of geosynchronous satellites, Ewig said. So he thought about making an alternative.

He went on to take on senior positions at Aerojet and Aerojet Rocketdyne, and then took a timeout to go to business school. At Stanford University, Ewig met two other people who helped him sketch out a vision of Audacy. (The name comes from the word "audacious," which someone used to describe their company plan, as well as the word "odyssey," which Ewig associates with Stanley Kubrick's famous film "2001: A Space Odyssey" and the adventures of the mythical Greek hero Odysseus.)

Then, about 18 months ago, Ewig and his associates, James Spicer and Sam Avery, co-founded the company. They raised $2 million last August in seed funding from several investors, led by Europe's Metatron Global Fund and StartX (a Stanford accelerator fund.)

Ewig is considering some ideas for partnerships with the Department of Defense and other agencies. If those partnerships bear fruit, Audacy could connect spacecraft so that a smaller cubesat, for example, could relay news of an interesting event on Earth to a big satellite with better cameras.

In addition, the Center for the Advancement of Science in Space (CASIS) — the nonprofit that manages U.S. experiments on the ISS — could use Audacy's data services to increase its capacity to send information to scientists, Ewig said.