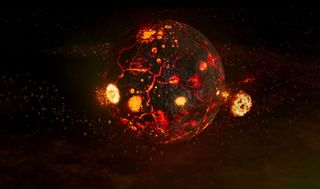 Starting with the creation of the universe, "Deep Time History" explores how exploding stars, colliding continents and the birth of human civilizations shaped the world we know.
(Image: © CuriosityStream)

Narrated by deep-time historian Jonathan Markley, the new series — "Deep Time History" — explores how key events such as the formation of the universe, exploding stars, clashing continents and evolution shaped the world as it is today. The three episodes are now available on CuriosityStream, a streaming service that hosts nonfiction documentaries and series about science, technology, history and nature.

"It [offers] a surprising new take on world history," Steve Burns, chief programming director at CuriosityStream and executive producer of "Deep Time History," told Space.com. "It doesn't just focus on history lessons we get in the classroom, but rather it combines science — from the Big Bang to the formation of the solar system — and shows how events deep in geologic time have influenced world history in surprising ways."

The three episodes discuss key historical events such as Mesopotamia's role as a center for the rise of civilization; the Age of Discovery, in which Christopher Columbus' voyage paved the way for innovation; and the Industrial Revolution in modern warfare, and how those events were influenced by physics, geology, biology and chemistry.

The three-part documentary series' inspiration comes from the return-to-science vision of John Hendricks, founder of the Discovery Channel and CuriosityStream, Burns said.

"In a television landscape where there is very little science or history, we try to do things that are innovative and surprising, and I think this series delivers," Burns added.