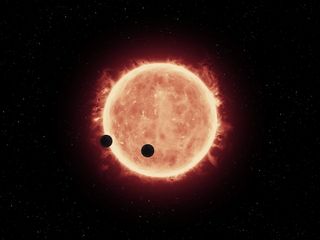 Two Earth-size planets orbiting a nearby star are now confirmed to be rocky, strengthening the case that they might be habitable, a new study finds.

The atmospheres of these worlds may range from vanishingly thin, like that of Mars, to hellishly dense, like Venus' air — and, possibly, comfortably in between, like Earth's, the researchers said.

In May, astronomers reported the discovery of three Earth-size planets orbiting a dim, cold, red star named TRAPPIST-1. This "ultracool dwarf" is located in the constellation Aquarius, about 39 light-years from Earth. (For comparison, Alpha Centauri, the nearest star system to our own, is about 4.3 light-years from Earth.) [10 Exoplanets That Could Host Alien Life]

Previous research found that TRAPPIST-1 is 2,000 times dimmer than the sun, a bit less than half as warm as the sun, about one-twelfth the sun's mass, and less than one-eighth the sun's width, making it only barely larger in diameter than Jupiter.

Ultracool dwarfs such as TRAPPIST-1 are very common in the Milky Way galaxy, making up about 15 percent of the stars near the sun. TRAPPIST-1's discoverers suggest that these kinds of stars may be the first places to look for life elsewhere in the universe, because they may be the only places where scientists using current technology can detect life on distant Earth-size planets.

Judging from the size and temperatures of the three planets around TRAPPIST-1, researchers previously suggested that regions on each world could be habitable — that is, have surfaces with just the right temperatures to harbor liquid water, a key ingredient of life as it is known on Earth. However, it was uncertain if these three planets were rocky worlds like Earth.

The scientists made this new discovery by pointing NASA's Hubble Space Telescope at TRAPPIST-1 to catch a rare event on May 4: a double transit, when two planets — in this case, TRAPPIST-1b and TRAPPIST-1c — pass in front of their star at nearly the same time.

"We actually have the capabilities to study the atmosphere of potentially habitable worlds with a facility, Hubble, designed in the '70s, well before we started to detect exoplanets," said study lead author Julien de Wit, a planetary scientist at the Massachusetts Institute of Technology. "This is just insanely exciting."

By analyzing the spectrum of light from the planets during the double transit, the researchers gained insight into both worlds simultaneously. This is the first time that scientists have used a double transit to study the atmospheric properties of two exoplanets at the same time, de Wit said.

"On May the 4th, the force was definitely with us," de Wit told Space.com, referencing the date's prominence as "Star Wars" Day.

The dips in TRAPPIST-1's light during the double transit involved a narrow range of wavelengths that did not vary much over that range. If these dips had varied significantly, this would have suggested that TRAPPIST-1b and TRAPPIST-1c have light, large, puffy atmospheres, similar to that of the gas giant Jupiter, the researchers said. Instead, the data suggest that both planets have more compact atmospheres, similar to those of rocky planets.

"Knowing that these planets are not 'mini gas giants' is a good thing, as they would have thus been uninhabitable, by our standards," de Wit said. "This double transit was a rare event that allowed us to kill two birds with one stone — to check if both these planets had large, puffy atmospheres or not."

It remains uncertain what specific kinds of atmospheres these planets do have. They could range from dense ones, like Venus'; to thin ones, like Mars'; to one more like Earth's.

"The next step is to try to disentangle all these possible scenarios that exist for these terrestrial planets," de Wit said in a statement.

TRAPPIST-1 was discovered using TRAPPIST (Transiting Planets and Planetesimals Small Telescope) in Chile, a new kind of ground telescope designed to scan the sky for ultracool dwarfs. Now, the researchers have formed a consortium named SPECULOOS (Search for habitable Planets Eclipsing Ultra-cool Stars) and are building four larger versions of TRAPPIST in Chile to analyze the brightest ultracool dwarf stars in the skies over the Southern Hemisphere. They are also trying to raise money to build telescopes to scan the northern sky.

The scientists detailed their findings online today (July 20) in the journal Nature.