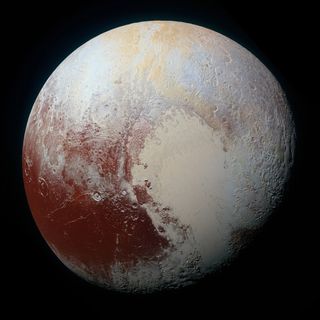 Astronomers hadn't been able to get a good look at Pluto since its discovery in 1930; even NASA's superpowerful Hubble Space Telescope could only resolve the distant dwarf planet into a blur of pixels. But that all changed on July 14, 2015, when New Horizons performed history's first-ever flyby of Pluto, zooming within just 7,800 miles (12,550 kilometers) of the frigid world's surface.

New Horizons' observations revealed Pluto to be a staggeringly complex and dynamic world, with towering water-ice mountains, vast plains of frozen nitrogen, surprisingly blue skies and a myriad of other intriguing features, including a huge "heart" that found its way onto Twitter feeds and T-shirts around the globe. [New Horizons' Pluto Flyby: Complete Coverage]

The probe's images also showed that the nitrogen-ice plain, known as Sputnik Planum, harbors no detectable craters, indicating that the region has been resurfaced quite recently. This came as a huge surprise to scientists, who had not expected that a world as small as Pluto could remain geologically active without some sort of gravitational interaction with a big body (such as Saturn or Jupiter).

And there are undoubtedly more discoveries to come: New Horizons is still beaming flyby data home, and likely won't be done doing so for another three months, mission principal investigator Alan Stern has said.

The spacecraft has other science work in its future as well. Two weeks ago, NASA officially approved an extended mission for New Horizons, which will allow the probe to fly by a small object called 2014 MU69 on Jan. 1, 2019.

Astronomers think 2014 MU69, which lies about 1 billion miles (1.6 billion km) beyond Pluto, is just 13 to 25 miles (21 to 40 km) wide. So it's a very different object than the dwarf planet Pluto, and studying it up-close should reveal new insights about the far outer solar system's formation and evolution, Stern has said.

"The capstone exploration of Pluto that completed humankind's first era of reconnaissance of the planets in our solar system is now behind us," Stern, who's based at the Southwest Research Institute in Boulder, Colorado, wrote in a blog post last week.

"We are very proud of how well that went and how much new knowledge resulted from it," he added. "But we are also excited to explore further — another flyby a billion miles beyond Pluto — and to see what knowledge and inspiration that exploration will bring just 2.5 years from now."

The $700 million New Horizons mission launched in January 2006. The nuclear-powered probe has plenty of juice left to take it through the 2019 flyby and beyond, mission officials have said.