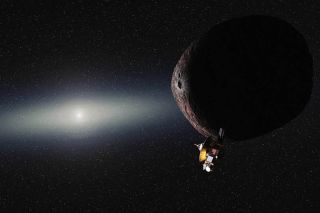 NASA has approved a mission extension for New Horizons, which performed the first-ever flyby of Pluto in July 2015. The spacecraft is now set for a Jan. 1, 2019 flyby of a small object called 2014 MU69, which lies about 1 billion miles (1.6 billion kilometers) beyond Pluto in the dark and frigid Kuiper Belt.

"The New Horizons mission to Pluto exceeded our expectations, and even today the data from the spacecraft continue to surprise," Jim Green, NASA’s Director of Planetary Science, said in a statement Friday (July 1). "We’re excited to continue onward into the dark depths of the outer solar system to a science target that wasn’t even discovered when the spacecraft launched." [Destination Pluto: NASA's New Horizons Mission in Pictures]

"This places [2014 MU69] in a key intermediate size regime to better understand planetary accretion," New Horizons principal investigator Alan Stern wrote in a blog post in April, when the New Horizons team officially submitted the mission extension proposal. "And given its 4-plus-billion-year existence in cold storage so far from the sun, MU69 will be the most pristine object ever visited by any space mission."

"If I do say so myself, the flyby of MU69 would be a landmark event, shattering all distance records for deep-space exploration, and yielding an impressive scientific bounty," added Stern, who's based at the Southwest Research Institute in Boulder, Colorado.

Dawn's primary science mission just ended, and team members had proposed sending the probe on to study an asteroid in the belt called Adeona. But NASA nixed that idea.

“The long-term monitoring of Ceres, particularly as it gets closer to perihelion — the part of its orbit with the shortest distance to the sun — has the potential to provide more significant science discoveries than a flyby of Adeona," Green said in the same statement.

A visit to Adeona would have marked the third cosmic body studied up-close by Dawn, which also orbited the protoplanet Vesta from July 2011 through September 2012. The spacecraft has enough fuel left to keep operating at Ceres through early 2017, mission team members have said.

These decisions were based on a report by the 2016 Planetary Mission Senior Review Panel, NASA officials said. The extensions are all contingent on the availability of resources, which will be determined by budget processes.