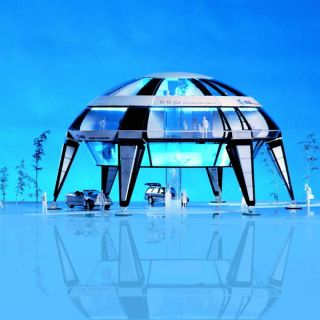 The original design for a SpaceHouse by researchers at the European Space Agency(ESA) called for space-age, lightweight outer material, solar panels and other space-derived systems for life on Earth.
(Image: © ESA.)

A new research station at the bottom of the world may give future Antarctica researchers some special treats, like the ability to live above ground and look out a window.

German scientists are adapting a habitat designed by the European Space Agency (ESA) to replace the shifting, disappearing and aging Neumayer II Research Station, a pair of metal tubes buried amongst the snow of the Ekstrom Ice Shelf in Antarctica's Atka Bay.

ESA's insect-like SpaceHouse habitat is designed to be nearly earthquake-proof to deal with shifting ice floes. It borrows materials and energy technologies originally developed for the agency's space missions.

"We initially started with earthquakes," said SpaceHouse designer Fritz Gampe, a senior technology transfer officer with ESA's technology transfer design. "One of the critical points, is that the lower floor plus the legs form a rigid structure with the outer shell."

Gampe told SPACE.com that ESA officials worked with the Alfred Wegener-Institute for Polar and Oceanic Research (AWI), which manages the Neumayer II station, on the initial circular design. The final version is still being drafted, he said.

Covered in snow on an ice shelf about 656 feet (200 meters) thick, the Neumayer II station will be retired in 2007. The outpost is composed primarily of two, 295-foot (90-meter) cylinders that provide living, working and storage space.

AWI researchers said snowdrifts have threatened to smother the station in recent years -- its two entry stairwells are all that appear above the icy surface -- and shifting ice has moved it from its intended location.

Despite its spindly-leg appearance, the structure is designed to withstand earthquakes up to 7.5 on the Richter scale as well as howling wind gusts of 136 miles (220 kilometers) an hour. The size of a SpaceHouse can be scaleable, anywhere from 39 feet (12 meters) to 131 feet (40 meters) in diameter and up to five floors.

"The old, buried station was just a simple structure in terms of construction, a steel tube with no windows," said Gampe. "You may wonder what people would see outside in the Antarctic but, although it's bare and naked, looking outside can be comforting."

In addition to providing a glimpse of the outer world, SpaceHouse's smooth, aerodynamic exterior would also prevent snow from accumulating around the structure. The new station's vehicle garage, however, will most likely still be beneath the surface.

"This station will be built on top of the ice," said Ingrid Zondervan, a researcher and spokeswoman for AWI, of Neumayer III. "It allows us to send more people for a longer amount of time."

Neumayer II currently hosts up to 10 people, whose responsibilities vary between research, medical and engineering tasks, for a period of about 15 months.

Gampe said since the outer shell, legs and floor are enough to support the SpaceHouse design, the internal wall configurations can be moved around as needed. Such a feature would be useful in traditional homes away from the polar station, to deal with changing lifestyles, he added.

"You are just not bound by fixed walls," Gampe said. "So in principle it's an open area where you can make yourself happy."

Zondervan said the cost requirements of a pure SpaceHouse design proved too much for Neumayer III, however the process is not yet finished.

Among the more obvious modifications is a shift away from the lightweight CFRP to a more conventional aluminum composite, ESA researchers said.

"We are now working toward a more economically feasible design, not round, but stretched in length," Gampe said, adding that the process is good practice for future space missions. "It's an evolving process for our dreams to go Mars and have a nice habitat there, and not just repeat what cavemen have done."

Some critical environmental systems are already being tested by polar installations, such as a water recycling system used by the French-Italian Concordia Antarctica station.

The Antarctic version of ESA's space house is only the beginning, especially for an agency with loftier goals.

"We dream to go to Mars," Gampe said. "To do that we need very lightweight housing." It might be inflatable or use rocket cylinders or the present shell-shaped structure.

In the near term, Gampe's ESA colleagues are working to build a small, pure SpaceHouse about 13 feet (4 meters) in radius as a garden house, then work up to a full-sized, 3,013 square foot (280 square meter) structure to serve as both testbed and physics museum. Because of its lightweight CFRP makeup, the finished house would be wholly portable and airlifted away if it proves unsightly in the future.

"We're currently planning a private-public venture to help get people acquainted with the concept," Gampe said. "We're just trying to get all our ideas together."