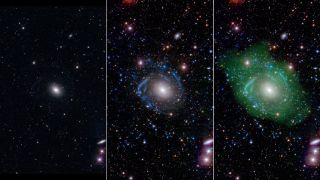 At left, in optical light, UGC 1382 appears to be a simple elliptical galaxy. But spiral arms emerged when astronomers incorporated ultraviolet and deep optical data (middle). Combining that with a view of low-density hydrogen gas (shown in green at right), scientists discovered that UGC 1382 is huge, about 718,000 light-years wide.
(Image: © NASA/JPL/Caltech/SDSS/NRAO)

A seemingly nondescript galaxy is actually a behemoth cobbled together out of various cosmic spare parts, Frankenstein-style, a new study suggests.

UGC 1382, which lies about 250 million light-years from Earth, had long been regarded as an old, small and ordinary elliptical galaxy. But new observations show that it's actually a spiral, 718,000 light-years wide — seven times larger than Earth's own Milky Way.

"The center of UGC 1382 is actually younger than the spiral disk surrounding it," study co-author Mark Seibert, of the Observatories of the Carnegie Institution for Science in Pasadena, California, said in a statement. "It's old on the outside and young on the inside. This is like finding a tree whose inner growth rings are younger than the outer rings."

The research team, led by Lea Hagen of Pennsylvania State University, analyzed images of UGC 1382 captured in ultraviolet light by NASA's Galaxy Evolution Explorer (GALEX) space telescope, which was deactivated in June 2013 after a decade of work.

Hagen and her colleagues targeted UGC 1382 because they were interested in learning more about how stars form in elliptical galaxies. But the GALEX observations sent the researchers down a different path.

"We saw spiral arms extending far outside this galaxy, which no one had noticed before, and which elliptical galaxies should not have," Hagen said in the same statement. "That put us on an expedition to find out what this galaxy is and how it formed."

The team then studied images of UGC 1382 taken in optical and infrared light by a number of other instruments and surveys, including the Sloan Digital Sky Survey, the Two Micron All Sky Survey, the National Radio Astronomy Observatory's Very Large Array in New Mexico, Carnegie's du Pont Telescope at Las Campanas Observatory in Chile and NASA's Wide-field Infrared Survey Explorer spacecraft.

These observations allowed the researchers to construct a new model of UGC 1382, which revealed the galaxy's true nature and enormous size. UGC 1382 is one of the three largest isolated disk galaxies ever found, the scientists said.

They think that the proto-UGC 1382 first consisted of a group of small galaxies made up mostly of gas and dark matter, strange stuff that neither reflects nor absorbs light and is far more abundant than "normal" matter. Later, a lenticular galaxy — a spinning disk without any spiral arms — formed nearby. The small galaxies likely began orbiting the lenticular one at least 3 billion years ago, eventually creating the structure that exists today, the scientists said.

"This rare 'Frankenstein' galaxy formed and is able to survive because it lies in a quiet little suburban neighborhood of the universe, where none of the hubbub of the more crowded parts can bother it," Seibert said. "It is so delicate that a slight nudge from a neighbor would cause it to disintegrate."

More research is needed to help flesh out this formation scenario, and to determine how common galaxies such as UGC 1382 are across the universe.

"By understanding this galaxy, we can get clues to how galaxies form on a larger scale, and uncover more galactic neighborhood surprises," Hagen said.

The new study has been accepted for publication in the Astrophysical Journal.