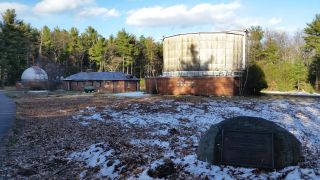 Unfortunately, the observatory shut down in 2005. But in its somewhat mummified state, it remains a beautiful monument to the exploration of the cosmos. Harvard senior astronomer David Latham and the last person to serve as director of the observatory, the now-retired Robert Stefanik, agreed to meet me one morning in April for a tour of the observatory, which sits about 30 miles (48 kilometers) west of Harvard, outside of Boston, in a rural area that made it a bit challenging to find.

The observatory is built on a giant ridge, the highest point around. Millions of years ago, a sheet of ice moved down from the north and stopped, creating the ridge. Behind the ridge, water filled in the lakes. Surrounding this spot are flat fields, the nation's wheat-producing breadbasket in colonial times. Then the country expanded, and farmers moved west to the treeless, rockless plains. [10 Biggest Telescopes on Earth: How They Measure Up]

As I pulled into the drive, snow drifted softly onto stone walls that snaked across the landscape. I had missed the small road on the first pass and had to turn around to find it again. The observatory hid behind a massive clump of trees.

I drove around the back of the building, admiring the silver dome. Several small wooden buildings dotted the grounds. I made sure to put on my borrowed ski jacket to ward off the unexpected chill in the April air before joining Stefanik, who was standing next to his car chatting on the phone. After hanging up, he explained that we might have a problem; the observatory custodian was supposed to open the building for us, but some sort of mix-up kept him from coming. Latham strode out of a nearby cluster of trees a few minutes later, wrapped in a down coat and gloves. He lives next to the observatory, and, thankfully, had a master key on him.

There was still a potential hitch, however. Latham wasn't sure he remembered how to turn off the alarm, and a recent spate of break-ins meant we could soon have company.

"The police are likely to come," Latham warned.

The university opted to shut down the telescope over a decade ago and instead partner with other institutions to gain access to even larger instruments, such as the Giant Magellan Telescope in Chile. While Oak Ridge is rarely staffed, Harvard continues to run an Optical SETI (Search for Extraterrestrial Intelligence) program from the observatory. On observing evenings, the roof automatically slides back from the building with the telescope inside and the instrument peers up at the sky — activities all commanded from afar.

The master key opened the observatory, and we all cringed a bit, waiting for the alarm. Silence. Stefanik hit the light switch, but nothing happened. The power was off, so we ended up safe from the cops after all.

The 61-inch (155 centimeters) telescope stood in the center of the building, dwarfing the work area around it. Light streamed in from a few windows off to the side, and more poured through the door that Stefanik struggled to prop open. The giant instrument towered above us, a monument to years past. Tables ran along the edge of the room, cluttered with papers and supplies that hinted at work in progress. A thick layer of dust and scattered cobwebs suggested otherwise.

We headed to the nearby office to turn on the power, hoping to see more than glimpses of the facility. My guides opened the door — still no alarms — and we walked through a narrow antechamber to another room.

The interior office had more windows than the observatory itself. Bookshelves lined the walls, and while Latham and Stefanik searched for a flashlight, I browsed the titles: astronomy texts, all of them. More papers were strewn across the flat surfaces, and a faded photograph of the observatory taken from above lay among them. "We came, we saw, we contacted!" read a caption. [13 Ways to Hunt Intelligent Aliens]

Stefanik gave up on the hunt for a light and decided to use his phone. He descended down a set of dark stairs around the corner, while Latham lamented the fate of small observatories. With the push toward bigger instruments, university observatories are being shut down. He estimated that, for Oak Ridge at least, this means that more money is spent on paying for a caretaker than was spent for the annual maintenance. But Harvard has other telescopes that can do work similar to what was being done at Oak Ridge so there was no need for the small observatory nearly an hour out of Boston.

Suddenly Latham sat up, speculating out loud that the power could have been turned off for a good reason. The two discussed the possibility of tripping the breaker and the potential of electrical shock. Though I would have loved to see the illuminated interior of the dome, I assured them it wasn't necessary. A later walk of the exterior revealed a precariously tipped power-line pole that likely prompted the shutoff.

Latham leaned against a table by the window, while Stefanik settled into a rolling chair next to him. I hopped up to sit on the countertop corner that was free of paper. From there, I could face the two.

In 1989, the two men were part of a team that observed an object called HD 114762b from the Oak Ridge Observatory. Their paper describing the discovery hinted that the object could be a planet orbiting another star (at the time, scientists had never observed a planet outside Earth's solar system). But in the 1980s, a flurry of objects initially announced as planets were later reclassified as brown dwarfs. These "failed stars" are larger than planets, but too small to start fusion reactions in their interiors.

So the team decided to be conservative and call HD 114762b a brown dwarf. While some objects were announced as brown dwarfs before the HD 114762b discovery, these previous finds were all eventually shown to be low-mass stars or other objects, making HD 114762b the first brown dwarf stand up to scrutiny.

Originally expecting a working observatory, I intended to ask Latham and Stefanik how the site had changed since 1989. Cobwebs revealed that few folks had visited the observatory in the last decade, and the telescope didn't shine with the promise to reveal the night sky. Many observatories, even small ones, have some electronics to help target the instrument, but the massive Oak Ridge telescope was unadorned. Instead, I asked how Harvard was studying the sky without using this station, and the scientists described instruments the university operates remotely, in Arizona, Peru, and elsewhere. We chatted briefly about their current research and how exoplanet-hunting had changed over the past 25 years. [7 Ways to Discover Alien Planets]

When we finished chatting, we walked back to the dome, where I took several pictures using my flash. Then, Latham locked up and strode off before I could shake his hand, headed home for dinner.

I asked Stefanik if it would be a problem if I hung around a bit longer and photographed the exterior. He said it should be fine as long as I identified myself if the police showed up. That idea must have given him second thoughts, because he wound up walking around with me. He pointed out the SETI building, which continues taking measurements today. Researchers don't need to drive up to the observatory; doors on the side slide open and the top slides backward when it's time to study the heavens.

Off to the side sat another building and a small dome. Antique telescopes stored in the first building once printed images of the cosmos on glass plates rather than film. I confirmed that the plates made here weren't the famous ones appearing in astronomy histories, pored over by the women originally called 'computers' that helped make several important astronomical discoveries.

The second building held another set of instruments. Between the two buildings sat an exposed concrete platform. The unusual viewing angle made me think perhaps the platform held a collection of unusual telescopes. I carefully climbed the rickety metal stairs, while Stefanik stood on the ground and warned me to watch for ice. Once I saw the objects up close, I realized they were only telescope mounts, similar to those I used in my college astronomy lab. That explained the strange look Stefanik gave me when I said I wanted to risk my neck to see them.

Farther into the woods, Stefanik pointed out a station where the U.S. Geological Survey takes seismology measurements. Another building housed a long-unused darkroom separated from the main building. Putting the darkroom in a separate building must keep people from accidentally walking in on you while you're exposing film, I mused. I didn't envy them the walk in winter, however.

Yet another building once housed a Clark Telescope, named for the company Alan Clark & Sons, which made incredibly precise lenses. Stefanik related how Clark instruments once contained precise clocks that kept the telescopes turning with the Earth. Today, the job is done with motors. Clark Telescopes were highly prized, he said.

As we walked back toward the towering dome, Stefanik described his job as director. When I asked what that entailed, he said, "At a small observatory like this, everything."

One such job included removing the snow, which piled up on the flat roof in Massachusetts winters. Apparently there were disagreements with management on how to clean things safely. Although custodians were assigned to remove the snow using harnesses designed to keep them safe, Stefanik did the work himself, frequently neglecting the safety equipment as he clambered about on the snow-covered roof. The harnesses, he said, were "more trouble than they were worth."

The ladder ascending the building's exterior sat on the side of the building next to the road. Stefanik said he often climbed it on frigid winter nights to grease the wheels that moved the dome. When they froze in place, the top of the observatory was stuck open. Waiting for the next day would leave sensitive equipment exposed, so it wasn't an option, but I can't imagine climbing the 30 feet (9 meters) on a windy winter night.

On the way down the drive as I was leaving, I stopped and looked back at the small observatory left alone. I climbed out and photographed the rock at the entrance that commemorates the lifelong interest in the observatory maintained by a past president of the board of overseers, George Agassiz. I glanced back at the historic observatory, which contributed to the understanding of the universe for about 70 years, and then I drove away, leaving it behind in the deserted field.