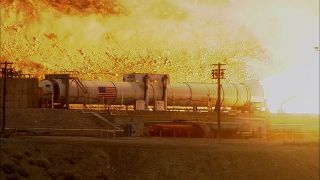 NASA will test-fire a booster for the world's most powerful rocket Tuesday morning (June 28), and you can watch the explosive action live online.

A solid rocket booster for NASA's Space Launch System (SLS) megarocket — which the agency is developing to blast astronauts toward Mars and other deep-space destinations — will fire for 2 minutes Tuesday at a facility in Utah, beginning at 10:05 a.m. EDT (1405 GMT). You can watch it live here at Space.com, courtesy of NASA TV; coverage starts at 9:30 a.m. EDT (1330 GMT).

NASA will hold a press conference at 11 a.m. EDT (1500 GMT) Tuesday to discuss the results of the test. You can listen to audio of the press conference here at Space.com as well, courtesy of NASA.

Tuesday's test will be the second and final ground test for the SLS booster before the huge rocket lifts off on its first space mission in 2018, which will be an uncrewed trip around the moon known as Exploration Mission-1 (EM-1).

The first ground test, which NASA declared a complete success, occurred in March 2015. The SLS booster burned as planned for 2 minutes — the same amount of time it will fire during a launch — and generated 3.6 million lbs. (1.6 million kilograms) of thrust, space agency officials said at the time.

When it's ready to go in 2018, the SLS will consist of a core stage powered by four RS-25 engines (the same kind that NASA used for the now-retired space shuttle), along with two 177-foot-tall (54 meters) solid rocket boosters like the one being tested Tuesday.

SLS is designed to launch NASA's Orion crew capsule, which is also in development. The duo is currently scheduled to fly astronauts for the first time in the early 2020s.

Tuesday's test, like the March 2015 trial, will take place in Promontory, Utah, at a facility owned by aerospace company Orbital ATK, an SLS partner.