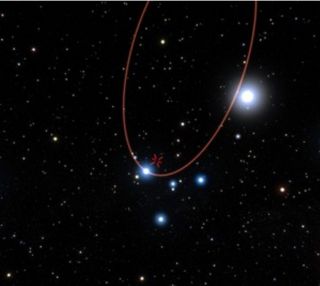 Artist's impression of the star S2 making close approach with Sagittarius A* in 2018.
(Image: © ESO/L. Calçada)

A powerful new instrument at one of the world's most powerful observatories is now online and capturing its first deep views of the environment surrounding the black hole behemoth center of our Milky Way.

RELATED: The Race to See Our Supermassive Black Hole

The GRAVITY instrument is currently undergoing commissioning at the Very Large Telescope (VLT) Interferometer at the ESO's Paranal Observatory in Chile and it's prime mission is to ultimately probe the region immediately surrounding Sagittarius A*, the 4 million solar mass supermassive black hole that lurks in the center of our galaxy, around 25,000 light-years from Earth. This sophisticated instrument collects light from the four main 8.2 meter diameter telescopes of the VLT Interferometer, combining it as one.

Interferometry allows several different telescopes to act as one large telescope, with the distance between them (their baseline) acting as the diameter of a much larger, virtual telescope. For the VLT, the interferometer mimics a 130 meter-wide telescope, boosting its collecting power 15 times that of a single operating VLT telescope. And now, with GRAVITY online, astronomers hope to probe the strongest gravity environment known in the universe: the very edge of a black hole's event horizon.

Although the instrument has only just gone online, it's already doing some cutting-edge observations of the stars surrounding Sagittarius A*. Of particular interest is a star named S2, which has an extreme 16 year orbit around the black hole. The star's orbit is also highly elongated, bringing it in very close proximity to the massive object. This makes S2 a prime target for studying the conditions of spacetime close to a black hole.

S2's orbit is the epitome of extreme. In 2018, the star will reach the closest part of its 16 year journey around Sagittarius A*, coming as close as 17 light-hours of the black hole's event horizon. At this point, the star will be traveling 30 million kilometers per hour, that's 2.5 percent the speed of light! This makes S2 the perfect tracer for astronomers using GRAVITY to measure its position to extreme precision to check whether its motion agrees with predictions set out by Einstein's general relativity.

"It was a fantastic moment for the whole team when the light from the star interfered for the first time -- after eight years of hard work," said Frank Eisenhauer, GRAVITY's lead scientist from the Max Planck Institute for Extraterrestrial Physics in Garching, Germany. "First we actively stabilized the interference on a bright nearby star, and then only a few minutes later we could really see the interference from the faint star -- to a lot of high-fives."

But GRAVITY's mission has only just begun. It will continue to study Sagittarius A*, eventually detecting and tracking flaring events near the event horizon, in real time, to measure the physics of the most extreme, strong gravity environment known.

GRAVITY isn't the only project in pursuit of getting up-close and personal with the supermassive black hole lurking in our galaxy's core. The Event Horizon Telescope, an interferometer composed of several radio telescopes around the globe, is also nearing completion and the first historic images of Sagittarius A*'s event horizon halo are only months away.