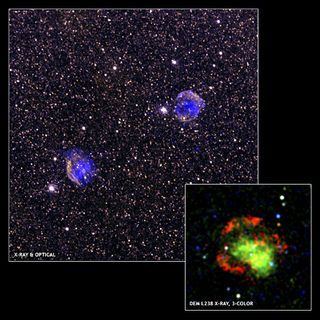 EM L238 and DEM L249 are two supernova remnants in the Large Magellanic Cloud. X-ray data from NASA's Chandra and ESA's XMM-Newton observatories suggest that the stars responsible for these debris fields were unusually young when they were destroyed by thermonuclear explosions.
(Image: © X-ray: NASA/CXC/NCSU/K.Borkowski; Optical: NOAO/CTIO/MCELS)

An unusually thick veil of gas discovered around the remains of two stellar corpses suggests some stars might have short fuses that allow them to explode much sooner than their peers.

Such "prompt" supernovas could provide scientists with a new way of studying events in the early history of the cosmos.

Small- and medium-sized stars, our Sun included, will shrivel into dense stellar corpses known as white dwarves when their fuel runs out. A lone white dwarf will gradually cool over time until it fades into darkness. But a white dwarf that has a nearby companion star will siphon gas from its neighbor. Over the course of billions of years, the paired white dwarf sucks off enough matter that it reaches a critical mass, at which point it undergoes a massive stellar explosion known as a Type 1a supernova.

The researchers noticed something else, though: The remnants' surrounding gas was hotter and shined brighter in the X-ray than typical Type 1a supernovas.

"We weren't around to see these stars before they exploded, but these X-ray clues tell us that something unusual happened in the case of these two," said study team member Sean Hendrick of Millersville University in Pennsylvania.

The researchers say the most likely explanation for the anomalous finding is that the stars which evolved into the white dwarfs were more massive than usual. The more massive a star is, the more gas it expels into its environment before it dies.

"We know that the more massive a star is, the shorter its lifetime," said study team member Kazimierz Borkowski of North Carolina State University, Raleigh. "If such a star could also begin to pull matter from its companion at an early stage, then this star would have a much shorter fuse and explode in only about 100 million years-much less than other Type 1a supernovas."

Prompt Type 1a supernovas could provide scientists with a new tool for probing the early universe. Scientists have traditionally used Type 1a explosions as cosmic mile markers, or "standard candles," to study the accelerated expansion of the universe because they are thought to shine with nearly equal brightness wherever they occur in the universe (this assertion has recently come under question, however).

If there is a class of stars that die and then explode more quickly than others, and if these stars were present during the early days of the universe, then they would have perished much earlier than other stars.

If scientists could detect the light from these early star deaths, they would have a powerful new tool for studying expansion in the universe's early epochs.