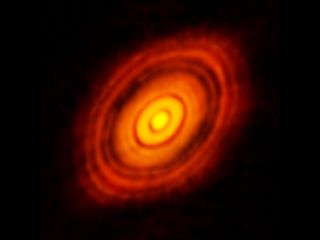 Baby alien worlds are indeed likely slicing gaps in the disk of dust and gas swirling around the young star HL Tauri — a finding that could help reshape scientists' current understanding of how planets form.

Astronomers found that some of the rings in the disk's gaseous component line up with rings in the dust, further supporting the theory that exoplanets are coalescing there — and suggesting that alien worlds may form much more quickly than scientists had thought.

"To our surprise, these gaps in the gas overlap with dust gaps," lead author Hsi-Wei Yen, a researcher at the Academia Sinica Institute of Astronomy and Astrophysics in Taiwan, said in a statement. "This supports the idea that the gaps are the footprints left by baby planets. Our results indicate that planets start to form much earlier than we expected." [HL Tauri's Planet-Forming Disc Revealed in Amazing Detail (Video)]

Yen and his colleagues used a novel data analysis technique to produce the sharpest image ever of the gas distribution around a young star.

The scientists examined archived images of HL Tauri captured by the Atacama Large Millimeter/submillimeter Array (ALMA) in Chile, which spotted gaps in the disk around the young star back in 2014. By taking a fresh approach to the existing data, the scientists found gaps in the gas at 28 and 69 times the Earth-sun distance. The gas rings coincide with two bright rings out of seven pairs of bright and dark dust rings.

Current planet-formation theories suggest that the material left behind from stars' birth is the stuff that builds planets. But scientists have thought that it takes tens of millions of years or more for worlds to develop from the disk of gas and dust. Scientists estimate that HL Tauri is only a million years old — far too young to give birth to planets, according to this view.

Previous studies suggested that HL Tauri's rings may have formed by other methods, such as dust building up or being destroyed over time. However, gaps related to changes in the dust properties would be unlikely to affect features of the gas disk, while planet formation would disrupt both, study team members said.

The team also found that the gas density in the inner ring is high enough to host a planet 80 percent as large as Jupiter. The outer ring could potentially contain a world with a mass more than double Jupiter's, but the scientists couldn't rule out that it formed due to drag between the dust and gas particles.

The research was published in The Astrophysical Journal Letters.