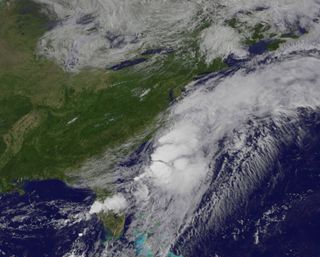 This visible-light image, captured by NOAA’s GOES-East satellite, shows that the bulk of the former tropical storm Colin's clouds had already moved into the Atlantic Ocean by June 7 at 9:30 a.m. EDT (1330 GMT).
(Image: © NASA/NOAA GOES Project)

New satellite photos show the former Tropical Storm Colin surging across Florida and into the Atlantic Ocean this morning (June 7).

The storm's progress has been tracked by a number of Earth-observing satellites, including NASA's Terra and Aqua spacecraft and the National Oceanic and Atmospheric Administration's (NOAA) GOES-East satellite.

According to the latest update from NOAA's National Hurricane Center (NHC) in Miami, which was published at 5 p.m. EDT (2100 GMT) today, Colin is moving northeast at about 40 mph (65 km/h), with maximum sustained winds near 60 mph (97 km/h).

"This general motion is expected to continue through Wednesday night," the update reads. "Some slight strengthening is possible today and tonight, but gradual weakening is expected to begin on Wednesday."

Colin never reached the status of hurricane, a term used for intense tropical cyclones with maximum sustained winds of at least 74 mph (119 km/h).