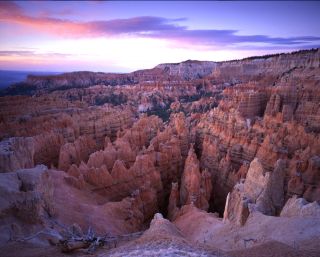 Space.com staff writer Calla Cofield is heading to the annual Bryce Canyon Astronomy Festival in Utah this week. The park is one of the best skywatching locations in the U.S. Read her dispatches about her trip here.

June 3: Back to those bright city lights

It's time to leave the beauty and serenity of Bryce Canyon National Park.

I've been planning on attending the park's annual astronomy festival for months, but prior to my arrival I didn't realize the degree to which stargazing is a part of the park's identity.

Bryce has had an official astronomy focus since the 1960s, according to the National Park Service website. In addition to the annual astronomy festival, the park hosts astronomy programs two or three nights a week year-round. The programs include an hour-long multimedia presentation and stargazing (with telescopes).

The park was formed to preserve the features that are best seen in daytime hours: those beautiful striped hoodoos (the tall, skinny rock formations) and the other scenic outlooks that lie along the 18-mile (29-kilometer) road that runs through the heart of the park. But at every talk I went to at the festival, the rangers emphasized the importance of preserving the diminishing resource of darkness. Bryce is now one of the best places in north America for stargazing. I wonder if the people who founded the park in the 1920s had any idea that it would develop this dual identity.

BRYCE CANYON NATIONAL PARK, Utah — Look at those giant solar panels! (In case you couldn't tell, that's a 15-passenger van parked underneath them in the photo). These babies are located just west of the visitor's center at Bryce Canyon National Park, and they pivot so they can follow the sun throughout the day. Here's a description of the technology from an information sign posted by park officials:

"The Bryce Canyon Solar Array consists of two dual-axis trackers that perfectly follow our sun throughout each day during every season of the year. Such telescope-like precision is required because unlike regular photovoltaic panels, Concentrating PhotoVoltaic (CPV) technology does not generate electricity from ambient light. For the Fresnel lens to concentrate sunlight and for the tiny triple-junction chips to convert it to electricity, the sun alignment has to be within 1-2 degrees."

Apparently the high tech trackers are worth it because "CPV outperforms all other kinds of solar energy, both in sunlight conversion efficiency and energy density."

The solar panels are part of an initiative to keep the park functional and in good shape for future generations.

June 2: The power of the sun

BRYCE CANYON NATIONAL PARK, Utah — High altitude deserts always remind me of the power of the sun. Standing directly under the midday sun makes it feel as though one's skin is actually cooking, even though temperatures in the shade can be quite pleasant. Then, when Earth's nearest star dips below the horizon, temperatures can plunge to winter coat levels.

I guess that's also a demonstration of the power of a good atmosphere and some humidity, but either way, it's a reminder that living in the universe is hard. Life needs heat and energy, and a nearby star is a great source of both those things — but a nearby star can also scorch a planet with radiation. Even if a planet lands in the sweet spot around its parent star, a location where liquid water can exist on the planet's surface, the star could change its energy output, which could also cause drastic changes for the planet.

On the second night of the Bryce Canyon Astronomy Festival, Donald Williams, a ranger at Bryce Canyon National Park, delivered a talk about planets around other stars (exoplanets). Scientists suspect that there are billions of planets in the Milky Way. I think about exoplanets a lot, but I'm typically thinking about them in the context of new observations or other new data, which means I've probably got my nose buried in a research paper. At Bryce Canyon, I'm thinking about exoplanets while looking up at "one of the world's most pristine dark skies," as another ranger put it. It's a different experience to ponder the possibility of life elsewhere in the universe when you actually have a nice, clear view of the universe.

June 1: The sky at night

BRYCE CANYON NATIONAL PARK, Utah — There's a phenomenon called "celestial vaulting" which is where a person feels as though they are going to fall into the night sky. This "only happens under the darkest skies," according to Kelly Ricks, a ranger at Bryce Canyon National Park. An hour before the actual stargazing began, Ricks delivered a talk about what visitors can expect to see and experience when they look skyward while visiting the park, which she described as "one of the world's most pristine dark skies."

There are approximately 7,500 stars are visible to the naked eye at Bryce Canyon National Park, Ricks said. The park is ideal for stargazing because of its geographic isolation from major sources of light pollution (it's over 200 miles to the nearest mid-sized city). Other factors that make it ideal are the low number of days with cloud cover (an average of 60 per year), its altitude (up to 9,000 feet or 2,743 meters above sea level) and its low humidity. The Earth's atmosphere blurs the view of the stars, so higher elevation means less atmosphere, and low humidity means less "stuff" (water vapor) in the atmosphere obscuring the view, Ricks said.

Besides the number of objects in the sky, one of the most striking things I noticed at Bryce were the colors of the celestial objects — Mars was so red it looked like a berry on a holly bush, as opposed to the washed out, orange-white I'm used to seeing in the city.

About 25 telescopes were set up at the stargazing location just outside the park entrance, right on the rim of Bryce Canyon. The scopes were all owned by volunteers from the Salt Lake Astronomical Society (SLAS). Members of the public were welcome to walk up and look through each lens to see planets, galaxies and nebula. Through a 7-inch (177 millimeter) refractor telescope I saw stripes on Jupiter (once again the color was amazing) and four of its moons. (If you're looking for tips to pick the right telescope for you, take a look at our Best Telescopes for the Money guide.)

The day had been hot, but the nighttime temperatures soon dropped into the low 50s Fahrenheit (around 10 degrees Celsius). I craned my neck to get a full view of the sky, waiting to see if I felt like I was falling.

Getting out of town

I'm headed to Bryce Canyon National Park for the annual Astronomy Festival that's held there each summer. The canyon is spiritual-experience-level beautiful in the day — it's best known for the tall, thin, colorful rock formations known as hoodoos. It's also extremely dark at night, so it's a prime spot for stargazing.

The human population of Utah (about 2.94 million) is mostly clustered in and around the Salt Lake Valley (home to Salt Lake City) and the two valleys directly north and south of it. Nearly 65 percent of Utah is government land, and the state is home to five national parks — only California and Alaska have more (8 each). Directly east of Salt Lake City, human habitats are thinned out by the Rocky Mountains. Drive for an hour west or south, and homes gradually evaporate in the desert. Take a map of the state, throw a dart at it, and there's a good chance you'll hit wilderness or maybe a ranch.

Utah's desert has variety and beauty. There are rocky hills covered in desert grasses and other drought-resistant plant life; there are copper-red mountains dotted with evergreen trees; and there are vast, wide-open stretches that could be mistaken for landscapes on Mars.

And then there are some totally unique surprises, like Bryce Canyon, known for its hoodoos: tall, thin rock formations that look sort of like totem poles. Nowhere else in the world has such a large clustering of hoodoos as Bryce Canyon, according to the National Parks Service website. There are plenty of photos of the park to drool over here.

It takes about four hours to get to Bryce Canyon National Park from Salt Lake. The park is located on the western edge of a massive wilderness area that hosts three official Dark Sky Parks. There are places to stop for gas along the way. Humanity certainly doesn't disappear on the way to Bryce, but it is sparse enough to make you want to stock up on gas and water when an oasis finally rises out of the dust.

The long drive is the cost of getting away from light pollution. I am purchasing an uninhibited view of the sky.