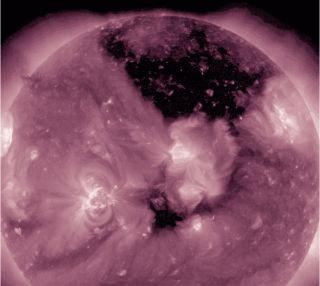 A coronal hole in the surface of the sun appears as a dark region near the top of the sphere. These holes are not visible to the human eye. The image shows wavelengths of light in the extreme ultraviolet band.
(Image: © NASA)

Between May 17 and 19, NASA's Solar Dynamics Observatory (SDO) captured an image of a new — and massive — "hole" on the sun's surface, NASA announced in a statement on Thursday (May 26).

A coronal hole is similar to a hole dug into the surface of the Earth: There is less material in the "hole" than in the parts surrounding it, even though the hole does not puncture the planet all the way through to the other side. Coronal holes are the same; they don't go straight through the sun, but are just low-density regions in the sun's atmosphere (the corona), NASA officials said in a statement.

Historically, the sun hasn't conjured the same cheesy image as the moon, however, because it's impossible to see these holes with the human eye. (And, of course, you should NEVER look directly at the sun without proper protection.) The coronal holes are visible in only certain wavelengths of extreme ultraviolet light.[The Sun in HD: Latest Photos by NASA's Solar Dynamics Observatory]

SDO captures this extreme light (seen in purple in the image above). In the picture, the coronal hole shows up as the dark region near the top of the star. The hole appears dark because it contains much less solar material and is therefore cooler than the surrounding area.

The low density of coronal holes is also responsible for high-speed solar winds. These streams of solar particles blow off the coronal holes about three times faster than they do in higher-density areas of the sun, according to the statement. If these high-speed blasts of particles collide with Earth, they can damage satellites or affect satellite operations, causing problems for people on the ground. The winds can also affect radio transmission, according to the National Oceanic And Atmospheric Administration.

But the solar winds aren't all bad; they're also responsible for the auroras, or the Northern and Southern Lights. In fact, a massive coronal hole similar to the one seen by SDO two weeks ago, kicked off a series of auroras on Earth in late 2015.

Coronal holes are associated with areas on the sun's surface where magnetic fields stretch far out into space, according to NASA. But it is still unclear exactly what causes these mysterious low-density regions on the sun.