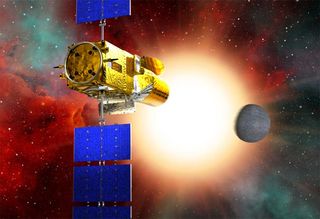 An artist's impression of the COROT satellite, set to launch on Dec. 27. COROT will use its telescope to monitor closely the changes in a star’s brightness that comes from a planet crossing in front of it. While it is looking at a star, COROT will also be able to detect ‘starquakes’, acoustical waves generated deep inside a star that send ripples across a star’s surface, altering its brightness.
(Image: © CNES 2006 - D. Ducros)

The launchof a European space telescope called COROT tomorrow could help planet hunting astronomers spot a bevyof small, rocky worlds only a few times larger than Earth. But the detection of a true, Earth-like world--the holygrail amongst planet seeking astronomers--will have to wait at least another twoyears until the launch of NASA's space observatory, Kepler.

In just alittle over a decade, the number of known planets outside our solar system hasjumped from zero to over 200. But most of these extrasolar planets are so-called "hot-Jupiters," large, gassy worlds many times bigger than Jupiter which orbit very close to their stars.

Astronomers'current catalogue of known exoplanets is heavily skewed towards these fast,gaseous worlds because most of the exoplanets discovered to date were spottedusing a technique that watches for the slight gravitational pull that orbiting planets can have ontheir parent stars. Because the planets would have to be large and orbitingclose to the star to exert any effect at all, these are the planets that are discovered.

Flying highabove the Earth's atmosphere, the Convection Rotation and planetary Transits(COROT) satellite [[image] will use a different technique better suited to findingsmaller worlds. Called the "transit" technique [image], it will detect extrasolar planets by measuring the dip instarlight their passage creates as they glide across the face of their parentstars.

COROT's 27centimeter (10.6 inch) lens will monitor the brightness of the stars, lookingfor the slight dip in starlight caused by the planet's passage. COROT will beable to monitor hundreds of thousands of stars simultaneously and will turn itsunblinking eye toward different parts of the sky for 150 days at a time. COROTis expected to find between 10 to 40 rocky worlds over the course of its twoand a half year mission, along with tens of new gas giant planets.

As it'sobserving a star for signs of a planet's passage, COROT will also watch for "starquakes," acoustical waves generated deep inside stars whichripple across a star's surface, altering its brightness. This information canbe used to calculate a star's precise mass, age and chemical composition.

In 2008,NASA will launch Kepler, a space telescope that works in the same way as COROT, butwhich will be able to detect the first Earth-sized planets in similar orbits toour own world.

"The goalof Kepler is to find Earth-sized planets in habitable zones around equivalentSuns, or slightly smaller," said Micheal Moore, NASA's program executive forthe mission. "We actually like them a bit smaller than our Sun itself, but basically the same thing."

UnlikeCOROT, which will watch multiple targets over the course of its mission, Keplerwill continually stare at about 100,000 stars in Cygnus region for four years.Cygnus is a prime viewing spot to look for rocky planets because it is outsidethe plane of our solar system, so interference from the Sun's light is not aproblem. "If you pick an area where you don't have to look through the Sun toget there, then you have twenty-four seven, 365 viewing of the sky," Moore said.

COROT andKepler are only the first of many planned projects designed to look for planetssimilar to Earth. ESA is also working on another project that will be capableof chemically analyzing light reflected off a distant planet's atmosphere,possibly revealing signs of life. Called Darwin, the planned satellite will be launched sometime around2020.

The COROTmission is led by the French national space agency (CNES) and supported byother international partners, including the European Space Agency (ESA),Austria Belgium, Germany, Spain and Brazil. The satellite is set to launch intospace on Dec. 27.